Grandpaw in need of prayers 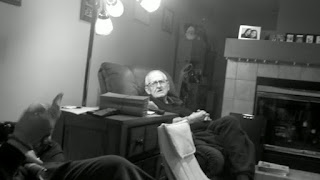 Our grandpaw, our Daddy’s Daddy, the man who purchased Daddy’s first dog, Barney, whose diary we sometimes read from (a diary is what dogs wrote in before the Big Giant Dog created the blog), and who has come over every Tuesday for dinner, providing the basis for my book “Tuesdays with Edgar” (my grandpaw, for those who have not read the story before, is responsible for Daddy having the name Edgar, because, while Daddy’s Mommy was being wheeled away to have her litter, his Daddy yelled to her to name him “anything but Edgar” and, because of a squeaky wheel, all she heard was Edgar) is in the hospital and we don’t know when he’ll be released and give me my next chapter of my Tuesdays book.

I should point out that the recent circumstances surrounding his medical condition has caused me, personally, lap time, and, even worse, bed snuggle time, as my pawrents have spent long nights at the hospital, not returning home until the high numbers of the single digits. But since Mommy and Daddy both love him, I can’t begrudge them their time with him, although I have kept track of bed time owed, and will collect.

It began one afternoon when Granpaw called with back pain. I was put on my blanket and Pocket shoved in her crate. Our pawrents were away for a long time. I kept checking my watch and getting angrier. When they came home they told me about Grandpaw. He had a kidney stone. Ouch. I forgave them for being late.

He was in the hospital for two days, went home, and two nights after that we were placed and shoved again, because Grandpaw could not pee. They ended up doing the equivalent of the thermometer up the butt to us, but it wasn’t his butt, and during insertion, the Nurse said “oops” and ran out of the room to get another nurse.

He had the stone out and that night he spent with us which iwas cool because we love having guests sleep over. He slept in the bed we have for our grand girl babies with the Princess sheets so the emasculation he received from the tube up the yoohoo continued. Pocket wanted to sleep with him but Grandpaw had never slept with a pup before, some humans never truly learn the pleasures of life.

Grandpaw went home but a few days later Daddy had to leave when Grandpaw fell down. He didn’t have to go to the hospital then, but the next day he went to get the emasculator pulled out. He had to wait a long, long time. The nurse finally came in and said they had to fill his bladder by pouring water the wrong way down the tube. She then left the room and the water poured right back out. The nurse came back in, ripped out the catheter, and had him stand, which is hard for him, with his pants around his ankles and a cup in his hand, for 15 minutes seeing if he could pee. He kept asking to see the doctor but he was torturing new people. Finally they let him leave when Daddy got mad. We don’t want to say the name of the doctor. That wouldn’t be right. Especially when all you have to do is provide a link HERE

Since that day Grandpaw kept getting worse. His feet became more and more swollen. His belly and thighs became swollen too. He had terrible, crippling, back pain. When Daddy took him to his primary doctor after lots of tests the doctor told him he didn’t know what was wrong. Mommy and Daddy, and Grandpaw, asked for Grandpaw to be admitted but his doctor said no. So they brought the poor man back to his house.

Daddy checked with him in the morning. He said he was having more trouble moving but was determined to get through the day. That night Daddy had his Fantasy Baseball Draft. The only fantasy is that Daddy is ever going to win money. Anyway at the start of the draft Grandpaw fell down in his house. He landed face first in his chair, next to the phone and was able to call for help. Auntie went with him to the hospital. Daddy stayed at his draft, texting and drafting, which may explain why he has three quarters of the Yankee infield.

Grandpaws’ prognosis is not great. He has an aortic aneurysm. He also is in the beginning stages of heart failure. They have been able to remove a lot of fluid from his legs, close to 20 pounds of it. But his legs are damaged so he is going to have to go to a nursing home for rehabilitation. Like many of our pawrents’ pawrents this is their biggest fear. Like our fear of something happening to our pawrents and us being left at the pound.

So we are asking our puppy friends for prayers, because no prayers are better than puppy prayers. Pray that Grandpaw is able to get up and around and is able to come to our house again so I can finish my Tuesday with Edagr blog.

It would be greatly appreciated.
Posted by Foley Monster, Pocket and River Song at 11:02 PM