On March 4, 2012 we recognized a dirty, wet, black dog who was abandoned by his family during a storm and left to die then had to depend on the kindness of strangers to survive. Well now that black dog has a name, Bear, and a new home with those kind neighbors, Sandy, Maggie, Nikki and their wonderful parents.

After his parents returned, over more than two months this beautiful black baby was further mistreated, left alone, left outside, covered in ticks and fleas. Whenever he saw Sandy’s parents he would give them that pleading look, but instead of begging for a treat this poor baby was begging for a home.

Sandy’s Daddy kept knocking on the neighboring door telling the bad parents that they obviously didn’t care for the dog and to just surrender him to a family that would love him and each time they were met with a curt no. Sandy’s Daddy would then sit and pull ticks off the black dog who looked up at him begging for love. 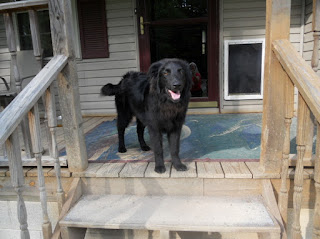 Finally, after watching Bear have one too many close calls while chasing cars Sandy’s Dad gathered all his kibbles together and went next door, threw them at the black dog’s owners and was declared the new owner of the black dog. There was an exchange of paper work too which is a very smart thing to do for humans.

As soon as he was in his proper home he got his name, Bear, after one of our most popular dogs, now at the bridge. He got to play the zoom game running around the yard with Nikki. He got a flea and tick bath to get rid of all those parasites. And he even got to sit on a human’s bed.

Despite some initial diva dog attitude from Nikki Bear settled into his new home, no more fleas, no more ticks, just good loving and a good home. Oh, except for that vet trip.

First came the leash. The newly named Bear had never worn a leash before and when he got attached to it he rolled over on his back and refused to move. His new Mom coaxed him into the car and he finally found out what was in them and that they really weren’t worth all that trouble chasing them.

There were lots of things done that never been done before. Poking, prodding, listening, sticking something where? There? He did have worms, but not serious worms, and got medicine for that, and he did have a skin infection from years of ticks and fleas but outside of that he was one healthy dog.

There will be yucky medicine, and some nipping and fighting, but Bear is no longer the nameless, cold, wet dog. He is Bear. A member of the pack. And he has been saved by a great family. And on this Mother’s Day we should recognize a Mom who has taken in Nikki, and Bear, while providing a great home for Sandy and Maggie. So happy new home Bear and happy Mother’s Day to one of the best Mom dogs in the world.
Posted by Foley Monster, Pocket and River Song at 11:16 PM