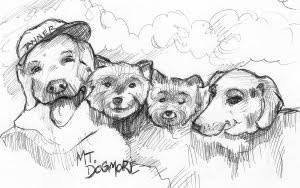 This is for the Bub in all of us.

Wednesday will be the third anniversary of the Tanner Brigade: A ragtag group of dogs, some who did not feel wanted on Doggyspace (or, like Pocket and I, and Tanner Bub and Cocoa, were barred) while others stayed on DS and joined the Tanner Brigade to keep in contact with their friends.

For those of you who don’t know we will repeat the story of the founding of the Brigade, as humans do the story of the nativity of Christmas Eve, because Pocket and I take ourselves way too seriously. It all began with a group named Yellow Labs on Doggyspace.
Tanner Bub founded the Yellow Labs group, but one day he found it gone. He questioned the old DS management and was told his Yellow Labs group was assimilated with another Labs group. But Tanner was upset that all the Yellow Labs threads and comments were gone. He asked me what to do Being a wise dog who has studied history I suggested, in the words of Franklin Douglas, that he agitate, agitate, agitate. Well Tanner sure took my words to heart. He agitated his butt right off of DS.

At the same time the vet gave Tanner some very bad news. He had cancer and did not have much longer to live. Pocket and I sat down and wrote a well thought out letter to the DS owner asking that Tanner would be allowed to stay on DS until he went to the Bridge so his friends could comfort his Mom. We received the following response, which is to TB members as remembered as the Gettysburgh address.

“As you know the rules are laid out clear, and we can not allow this bickering to continue, nor slander. It may be unforchunit for her personaly, however she knew she should not have done that before she even posted it, and we can not make exceptions in this case due to the size of the event. Dont expect it to be the last eather, the entire admin/support team are hunting down anyone that was part of the event on bothsides as its a clear break of the community rules. Its sad to see so many adults act like children.”

When we read the letter Pocket and I were both stunned over how mean it was, and how hilarious it was. We forwarded it to many of our friends. This got our account suspended. When we wrote a blog on the site that is now known as Small Tales we got terminated from DS. Hey we were just sticking up for our friend, and, perhaps in doing so, showed that the former DS owner was either a drunk illiterate or just illiterate.

Our good friend Teddie Earnest told us about a site where we could all be friends and that lasted until the night Tanner went to the bridge. Some of us created fake e-mail accounts and used them to create fake dog names, sign into DS, and post Tanner’s pictures as ours. Others, who stayed on DS, changed their profile pics to Tanner’s. Wherever anyone looked they saw Tanner’s picture.

There was one mean dogggy owner who came to our site just to start trouble and some of our friends fled for parts unknown. Someone had to be a dog of action, and that dog was me. I began my own site on the Ning Network naming it after my friend Tanner and calling it a Brigade because it was a Brigade that went into DS and posted Tanner’s picture. Little by little some of our friends chose to join us and we became a happy family.

This year we noticed our DS ban was lifted and we created our account and we have found lots of old friends and made lots of new ones. We have had an excellent time talking and playing with them.

Us members of both sites like to think of the Tanner Brigade as a small town where everyone knows each other and we care about each other very much. We only get a few new members a year. Sometimes members leave but we hold the door open for them if they want to return.

DS is like the big city where you can meet a new best friend every day. You might not see someone everyday but when you do you get a big hi. There is more drama but that is life in the big city.

But what we all have on these sites is a record, a record of our lives. Although our futures may be short we are going to fill those short futures with many, many, memories.

In the Tanner Brigade the youngest human is our grandbaby Maddie. She is only 11 years old. Maybe someday, when we’re all at the bridge, human and pups reunited, Maddie’s dog will be running the Brigade, and deep in the belly of it’s archives, we will all live, forever. 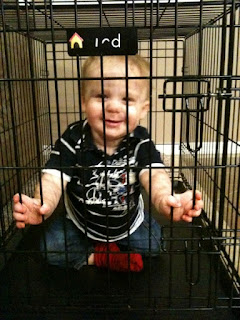 So this is why we will tell our story each year. So that is remembered, and passed down, and our memories never die.

There is a picture on my Mom’s bureau. It’s of a great grand Mom, leathery Portuguese skin. You wouldn’t know she was related to my Mom except for the two dogs in the picture, one in her lap, the other at the end of her fingernails as she scratches it. Someone found the picture among boxes of family things. We don’t know who those pups are, but in the picture they are living forever.

And thanks to our Internet friends so are we.
Posted by Foley Monster, Pocket and River Song at 11:10 PM

Email ThisBlogThis!Share to TwitterShare to FacebookShare to Pinterest
Labels: Pups of the week; Tanner Brigade