May 04, 2012
There have been lots of doings around my castle lately and while it has cost me lap time I haven’t minded, but it’s starting to gnaw at my infinite patience. As some of you may have learned on Riley’s blog on TB we have a new member of our extended family. My human sister Kim, who was my bestie’s Bailey’s Mom, got picked out by a little male Shih Tzu named Neely to be his Mom. 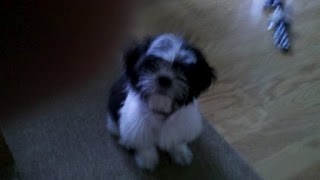 I must admit he is a cute little thing. He is going to stay with us in July and that’s when the real test will be. I take a backseat to no interloper in the cuteness department. And Mommy’s lap is mine if I want it. If Neely hasn’t been fixed yet and tries anything funny he’s got a nip of a surprise waiting for him. But may I say to him my casa is Sue’s cases. So consider yourself at home. But if you wander into my leopard skin vagina condo the fur is going to fly.

Now you would think, for my sister Kim’s family, that would be enough of a story line, even in May sweeps. But my sweet grandbaby Maddie had her knee pop out of place Sunday. They took her to the human hospital where they had to wait forever to find out what they were going to do, which wasn’t much, pain meds and an immobilizer. Mommy and Daddy stayed up way past our bedtime waiting for news of. I was very cranky, because I want to go to sleep at bedtime, but I was a worried grand Yorkie too. She should be fine but she has a dance recital during Father’s Day weekend. She is 11 and was going to get her five year trophy. So, if you have some spare prayers can you throw some her way? She has been working on this dance for so long it would be a shame if she couldn’t take part in the recital.

Our human brother Chad got inducted into his high school’s Hall of Fame Saturday night. (Note to myself: Why isn’t there a Dog’s Hall of Fame and if there is why am I not in it?) He got inducted for playing baseball. I never saw him play in high school. I did see him play some semi-pro ball at a nice field in Easton Ma, that had a huge spreading chestnut field in the middle of centerfield. He once hit a ball clear over that tree. It was the furthest thing I ever saw struck. I also saw him hit a line drive right off the pitcher’s noggin. I looked at Mommy and said “that boy’s dead.” He wasn’t though. He got up and fell down a lot but he wasn’t dead. The only dead guy I’ve ever seen is that one in Reno I killed just to watch him die.


My big sister at the Bridge Blake went to a lot of his games when Chad was at High School. Once, at Harvard Stadium, it was so hot Mommy and Daddy had to hold Blake up to the car air conditioner until she stopped panting. Another time there was a foul ball falling down right on top of Mommy and Blake, who was in her lap. Daddy, and one of his friends, saw the falling ball and got the hell out of the way running for their lives. The ball missed Mommy by about an inch. She still hasn’t let Daddy forget that.

Chad made Mommy feel good singling her out for all she did for him which was very nice of him. Pocket and I give him two tips of the tail for that. Even though he took away a lot of Saturday night lap time we forgive him.

Mommy and Daddy have spent lots of time outside working under our supervision on the lawn. Some of the prune people have come by to say how much they like the new garden. My Mommy tells them thank you very much. Like it was her idea. Wow, first no Hall of Fame then I get dissed on my garden.

Finally an update on our Grandpaw. He is still in rehab. When Lindsay Lohan went to the Correspondents dinner Saturday night he finally got some peace being without a roommate. He is out of the wheel chair and getting around with a walker. We are a little worried because he is losing weight and they are trying to give him some food to put some weight on him. I have told him to eat more kibble but again my well thought out advice has gone unheeded. Humans, can’t live with them, would be hunted and killed by rabid squirrels without them. But thank you for your many prayers for Grandpaw. Hopefully by next month he will be back here for supper on Tuesday nights while I try to stay out of the way of his walker and Pocket nips at his tennis balls.

So I would have to say that the status of the Monster Family is not too bad right now. Hope you and your families are all in good health and enjoying the spring. Good night and God bless.