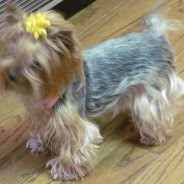 I never want to be accused of favoritism but today I am willing to take that chance because I am recognizing two pups, Chelsea and Ashton, who are both members of the mightiest of dog breeds, the Yorkshire Terrier.

For almost an entire month we did not hear from our sweet friends. We became very concerned because they lived in the part of Texas where there were terrible tornadoes, and while there were no fatalities the human news reporters rarely count dogs among their casualties so there was still reason for concern. We all sent messages, e-mail, tree mail, pee a grams, but we got no response.

Finally our little friends (little to most of you, to us they are properly sized) posted an update. Her ‘puter got sick and she called the tech support so much the phone system crashed and no one could order Chinese food in New Dehli for a week. That was on April 21 and we were so happy the Yorkie silence was over.

Then we heard no yelping from them for another three weeks. Now, as you kind readers, and my friends, can tell you, it just isn’t natural for a Yorkie to stop yapping. Then they posted again and they were still having ‘puter problems. Chelsea and Ashton live, like we do, in a Senior community, and sometime in these places, thinking goes a bit sideways, and they start spending their money of things like shower chairs, higher toilet seats and something called a Commode which I can only compare to the drivethru of bathrooms for poo lovers.

I took the time to send a scathing e-mail to the AARP saying that instead of sending old folks key rings, flashlights and magnets they should send them laptops with free wi-fi. I am still waiting on a response. But you know, old folks, takes them awhile to respond.

Then, further down in the posting, I realized my genetic sisters had buried the lead along with a bone. Their Mom needed eye surgery which is bad for dogs but worse for humans because we can smell everything around for six square acres and poor Moms don’t have that ability. And let me tell you, from experience, us Yorkies make really bad seeing eye dogs, unless the only place blind humans want to go is after anything that runs across their path or something that smells new in the grass.
In an odd twist, Chelsea’s and Ashton’s Mom decided to become a pirate. She got herself an eye patch. And she has made all the elderly women in her building refer to her as “Big Mama.” All she needs is a parrot, which she is not getting, because us Yorkies don’t take to anything that weighs the same as us and has wings.

In their last post they said they had professional computer help which makes me wonder how a Yorkie can be affording that. Hopefully we will be hearing more from them soon and their Mom will be on their new computer. But for now they are doing what us Yorkies do best, keeping close to their Mom until she feels better.

Take care of your Moms my friends, and we will keep the Yorkie spirit going on the old Internet for you.

Posted by Foley Monster, Pocket and River Song at 9:35 PM

Email ThisBlogThis!Share to TwitterShare to FacebookShare to Pinterest
Labels: Chelsea and Ashton, Pup of the week