A Determined Tupper, Max, Boris and a Villiage Bring Their Mom and Lily Together 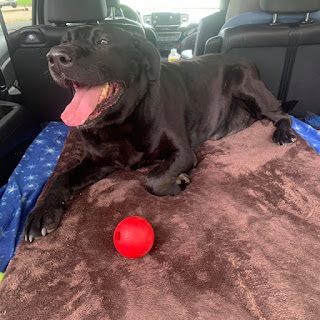 When Boris joined his siblings Tupper and Max at the Bridge in April, he quickly rebounded into his mom’s dreams. He had a prescription for what he knew was the only medicine that would rebuild his parents’ broken hearts:  Another dog.
But his mom told him that there were several reasons why they could not acquire a new pet, the main one being their health.  They were not capable of raising a puppy.  A disappointed Boris told her he understood and kissed her.  Both he and his mom were upset the next day because Boris could remember what was said, and his mom had no recollection of the visit.
Tupper consoled his brother.  Max insisted that they knew what their parents needed more than they did.  He suggested that they overwhelm their parents' dreams by continually bombarding them with the suggestion that the only way for them to be whole again was to get another dog.
Tupper told them it wouldn’t work. He knew his parents needed more of a reason to get another dog than just to make themselves happy, even though it surely would.  The only way they would obtain another dog only if it would benefit the dog more than them.
He also knew it would take more than just dream visits to persuade his parents.  Their friends, especially the ones who were dog lovers, needed to intervene.  Max and Boris wanted to help, so they were each sent out to go into one of their mom’s friends' dreams.
Max took Angel Misha with him into the dreams of the Golden Girls’ mom Sharry.  They explained how Momma Pam needed another dog, but she was reluctant to look for one and needed encouragement from her friends. Misha’s mom Sharry agreed to help.
That morning Tupper and Max found a new dog for their mom, a six-year-old Labrador Retriever named Lily, whose family had to give her up.  When the trio tried to enter their mom’s dreams to suggest she search for Lily, they encountered a brick wall.  Then Boris went with Scooter into the dreams of his mom Betty.  They explained how Momma Betty could help.   They needed her to find Lily on the Internet.  She did not let her angels down.
When Betty located Lily, she called Sherry.  The two of them talked to Lily’s mother, who explained what a sweet dog Lily was,  that she was calm, and needed nothing but a good home and love.  Max, Boris, and Tupper knew it was the perfect dog for their mom.  Now they needed their mom’s friends to convince her of that.
Both women talked to Momma Pam, who was reluctant but agreed to call Lily’s mom. During the conversation, they decided on a time for Momma Pam to meet Lily.  There were no promises made.  Momma, Pam, would decide when she met Lily.  Most of all, she was looking for signs from her angels that she would allow Lily to become the newest member of their household.
Momma Pam brought her husband and grandson to meet Lily and help her look for signs from her angels.  When Momma Pam walked outside, she saw Tupper in the guise of a beautiful monarch butterfly and knew that he approved.  Max made his mom recall the Lily of the Valley that was planted along her grandmother’s driveway when she was growing up.  Then Boris K reminded her that he went to the Bridge on Easter Sunday.  The Easter Sunday flower is the Lily.
When Momma Pam and the family saw Lily, every bit of reluctance was swept away, and her heart started to rebuild at first sight.  Lily is now in her second fantastic home.  She has been told by her new siblings how to make their Momma heal, and Lily has been doing a terrific job.  Thanks to her, Momma Pam’s heart will be whole again soon.
Tupper, Boris, and Max are thrilled that their mom and dad have a dog in the house again, and that she has made it a home. They recognize the smile on their mom’s face that has been long kissing and say they are grateful to every parent who made it happen.
It takes a village to find a good dog, a home, and a mom a good dog.