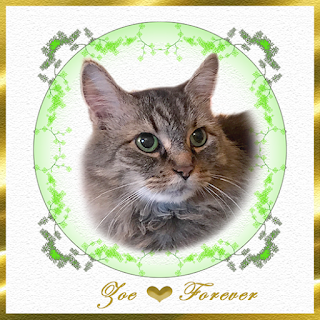 Dear Sweet Mommy:  I have been fortunate to make many kitty friends since I arrived at the Bridge.  When I was mortal, I had a problematic relationship with cats.  The only ones I knew were outdoor kitties, who did not respect boundaries and would sit on my porch and taunt me.   I never met an indoor cat, which is a whole different species.
Now I count several house cats as my closest friends and even a couple of law-abiding outdoor kitties.  I have had the distinct pleasure of meeting Brian and his large cat pack.  He, and his siblings, have taught me to appreciate kitties’ strange and somewhat mysterious ways.  Not only are cats no longer my enemies, but they are also some of my best friends.
That is why I traveled to cat landing, where Simon swears in the kitty’s who cross the Bridge.  Zoe, Brian’s sister, after a long battle with illness, was arriving at the Bridge, and I promised to be there to greet her and help her adjust in any way I could.
I often write about how dogs fight to keep from going to the Bridge.  Cats can battle just as hard.  I know there is the legend that kitties have nine lives because they survive many death-defying situations, but like all mortals, they only have so many heartbeats.  They are just stubborn when it is time to go.
Being stubborn about going somewhere is how Zoe became part of the family.  When her dad went to the Kitten Action Team to adopt her and her sister Angel Gracie, who stood next to me while we waited, Zoe jumped over a concrete barrier signaling to her dad that she would never be a cat who agreed to go somewhere easily.  That attitude would do her well throughout her life.
There would be many times in her life when Zoe underwent operations for hairballs and dental work.  Zoe was not blessed with a body that could tolerate anesthesia, so each time she was put under, there was a risk she would not wake up.  When the Bridge angels came to her and asked if she had enough, she jumped another wall and kept going.
Zoe handled those minor ailments with panache, but when she contracted Stage 2 chronic kidney disease, her parents feared that she would not be able to fight off this illness as easily.  Zoe proved them wrong; her numbers rose instead of fell and were almost normal during her last test.
As we have learned, the Bridge Angels are persistent and will keep giving their prey illnesses until she joins them.  Zoey was stricken with lymphoma, a disease that was a sign that the Dark Angels really wanted her at the Bridge.  Zoey, along with her parents, who yearned for her to be with them for every minute she could, fought together to hold off the worst effects of the illness for a long as felinely possible.
Zoe also had diabetes, which she handled quietly.  When she was diagnosed with lymphoma, she was prescribed prednisone, which caused her numbers to spike, so she had to go on insulin.  Zoe went to the doctor last week, and when her parents got her home, they knew something was wrong.  If Zoe could have talked, she would have said she was fine, but the family knew differently.
Knowing their girl wasn’t feeling herself, and recognizing the many years she had battled, her parents decided to let her stop.  Zoe had given every bit of her devotion.  With a heavy heart and teary eyes, they said goodbye to their little girl so she could shake off all those illnesses and feel like a newborn kitty again.  It would have surprised no one if Zoey jumped a wall trying to avoid going on her trip. But she acquiesced.
I wish parents could see their babies cross the Bridge, to witness them running as they did in their youth, to see them breathing easily, and the smile that comes on their faces when they see the siblings who preceded them.  Zoey did all of these and more.
As soon as Gracie saw her sister, she ran to greet her. They hugged, danced, and were joined by more of their angel pack members.  Dog welcomes are very loud, with a lot of barking and howling.  Kitties are greeted by purrs.  It is enchanting.
I left before the welcoming feast.  It is always fish, and I am not a fan.  But, if my friend needs me, I will come running in barking.  We are all friends here, no matter which species it is.  I wish the same were true on the mortal side.
Love Foley Monster