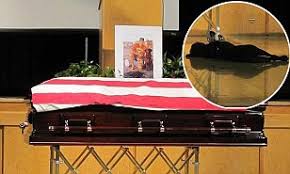 Being the dog who belongs to a member of the military can be challenging.  One of the biggest problems is that the parents are gone for long periods.  We all worry about our parents when they are away, but when they are out of the country for months, with an entire army trying to kill them, it can be hell for dogs.  When their parents return, their dogs joyfully dance as they flush all the worries from their system.

Hawkeye was devoted entirely to his father, John, who was a NAVY seal.  John was gone for months, but when he came home, it was just Hawkeye and him.  They would go for long walks together, play ball, take car rides, and sleep in the same bed.  Hawkeye always hated when John left and waited by the window for him to return.

He lived with John’s parents, who took excellent care of him, but not with the devotion that John placed upon him.  One day a terrible phone call came.  An instinct placed in us before birth was triggered, and Hawkeye knew a horrific event that had occurred.  His heart shattered into a million pieces, but he could not mourn yet; he had to take care of John’s parents because that is what he would have wanted.

Hawkeye was an extraordinarily well-behaved dog, and his parents thought it would only be right if he went to John’s service. Hawkeye sat with his dad’s parents until the coffin was brought into the church.  Solemnly, Hawkeye stood, walked to the casket, and laid down next to it, protecting John.  Hawkeye laid with the body throughout the hour-long service.  When it concluded, Hawkeye stood and followed the coffin out of the church.  Once the coffin was slipped into the back of the hearse, Hawkeye jumped in the vehicle.  The generous driver, recognizing love and devotion, allowed Hawkeye to ride to the church with his dad.

When the hearse reached the cemetery, Hawkeye waited for the coffin to be removed from the hearse before he climbed out.  He walked behind the pallbearers to the gravesite and lay down next to the coffin.  He stayed there for the entire thirty-minute service and beyond.  Hawkeye had always come when he was called, but after the ceremony had concluded, and John’s parents summoned him, he refused, laying by the grave, with his head down.  There was a seldom-used leash in the vehicle. John’s father hooked the leash on to Hawkeye’s collar.  It took a great deal of pulling and persuading Hawkeye to abandon his vigil.

Hawkeye lived the rest of his days with John’s parents, who he adopted as his own.  He was a content dog, but every day he missed his dad.  When he fell ill, he did not let his parents’ know until the disease was too far gone.  Before Hawkeye went to the Bridge, he looked at his parents with loving eyes, thanked them, and then made his long-awaited final journey.  I saw Hawkeye cross the Bridge, then climb the stairs, faster than he had ever moved before.  He knew who was waiting for him at the top of the Bridge.

Usually, it is a dog waiting for a human.   That is the way it is meant to be.  Human angels greeting their newly immortal dogs is a reunion filled with joy and no sorrow.  I know you have seen videos of soldiers reuniting with their dogs on the mortal side.  It is more moving at the Bridge because the reunion is for eternity, and the dog and human will never be separated.    When John saw Hawkeye crossing the Bridge,, he ran down the stairs.  Hawkeye stopped, made sure it was his dad, then ran across the green grass, jumped into John’s arms, knocked him down, and covered him with 1,000 kissed.

Every day John and Hawkeye walk the mountain paths together, play ball, and sleep under the stars.  If we encounter them, they are very polite, but eventually move on, as they try to make up for their lost time.  They are two hearts, still beating as one.  They will be that way forever.  It is a beautiful thing.