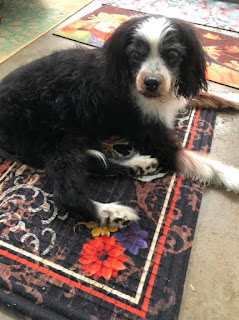 It was a sad day on the mortal side when Samoa departed for Rainbow Bridge.  Samoa spent 14 years as his mom’s unofficial therapy and velcro dog.  While he had siblings Barnaby and Jeremiah, who his mom loves very much, Samoa was her heart dog, and when one goes to the Bridge, so does a large and vital part of their parent’s soul.

Heart dogs usually keep secrets from their siblings.  They don’t want them to know all the little ways that they make their parents feel loved and  create a special bond between dog and human.  If they did, the siblings could usurp their position in their mom’s hearts.

At the time Samoa went to the Bridge, he was devoted to his mom.  After arriving in their dreams, he told Barnaby and Jemima his secrets to ease her suffering. One of his tricks was to stay with his mom while she was in the kitchen, not because he wanted food, although that was a fine side-effect, but because it made his mom feel loved.

“We knew that,” Jemima said.  “We tried to get near her in the kitchen, but you growled at us.”

“That isn’t because I didn’t want you with us.   It's because too many dogs spoil the broth.”  Here is an essential rule for angels:  We lie:  As Somoa was indeed doing.   “But, now one of you needs to take my spot supervising mommy when she cooks.”

Jemima’s paw went up, and he said that he would do it.  Barnaby swore to himself.  He has always had a lazy paw.  That night, when their mom was cooking, she was stunned when Jemima took Samoa’s spot next to her.

Barnaby and Jemima asked Samoa, who suffered from dietary issues and received delicious, home-cooked meals if they could continue to get a taste of his dinner each day.  “You don’t want mommy to go to all the expense of making meals just to give you a taste,” Samoa said.  But they did.  Sadly for them, they have not got a taste since Samoa went to the Bridge. “I told you that you would miss me,” Samoa told them.  “And, not just because of the food.”  Samoa was right.

There were a lot of tears that fell from rain clouds when Samoa reached the Bridge.  His mom shared his life with so many people.  When they learned of his passing, they wept for the special boy.  Of course, no one cried more than his mom, and Samoa saved all her teams in a jar, which he sniffs several times a day because they smell like her.

He also spends lots of time going into his mom’s dreams.  He tries to comfort her, but, like all humans, who have to make sense of the world, her subconscious will not allow her to remember his visits.  Still, his mom might retain some of Samoa’s words, and that makes the little dog’s efforts worth it.

The beginning of the winter can be the worst time for a pup to pass because the winged creature factories close.  He will have to wait until the new line of butterfly and bird bodies are available in the spring. When they arrive, I know Samoa will search for the perfect body to visit his mom.

Until then, Samoa will be visiting his mom in her dreams and as a ghost.   He will slowly tell Jemima and Barnaby the special secrets that made him her mom’s heart dog.  But not all of them. Some need to be kept between him and his mom.

Posted by Foley Monster, Pocket and River Song at 8:34 PM