Oscar and Kayak are Trying to Get Along 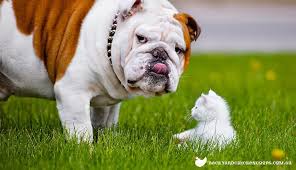 Oscar, the bulldog, lived an idyllic life.  It was just him and his two parents in their Michigan home.  His parents treated him like a child, and he reveled in the attention.

He was the happiest and most content dog in the entire Upper peninsula.

His parents had no reason to add another soul to the pack.  But, often, life had other plans. Miles from Oscar’s house, a cat, was abandoned by uncaring parents.  She prayed to the cat angels to help her find a good home.  They searched the surrounding area and determined that the best possible place would be at Oscar’s house.  They knew his parents wouldn’t hesitate to help an animal in need.

They instructed the cat on how to find Oscar’s house.  It took her a day to get there.  He was cold and hungry.  The angels showed him how to act pitifully by shivering and meowing mournfully.  He played the part of tired, hungry, and scared cat to perfection.  That was because he was one.

Oscar was the first in the house to see the cat, and he let his instincts be his guide.  He barked at her with all his ferocious might.  The cat trembled on the other side of the glass door.  Oscar’s mom came downstairs to see what the commotion was and saw her big dog scaring the lost little kitty.

She told Oscar to be quiet and leave the poor cat alone.  This stunned the dog.  His mom had never talked to him in such a manner.  He was shocked when she opened the door, reached down, picked up the kitty, and let it into Oscar’s house.  The kitty snuggled up on his mom’s chest.  She stroked it and then sat on Oscar’s couch with it on her chest.  When Oscar tried to jump up and join them, his mom told him to get down.  She had never done that before.  The interloper was taking over Oscar’s house, and he could not have that.  But, no matter what he did, his mom told him to stop until she finally put him in a bedroom.  Oscar whimpered behind the door.  The wet cat was taking his place in the family.

He heard his parents discussing keeping the cat.  He whined loudly, hoping his opinion counted while fearing it did not.  When he was finally let out of the room, the cat now had a name, Kayak, which meant he was now part of the pack and was sitting with him, mom.  His parents introduced him to Kayak and encouraged him to come near her.  Wanting to please his mom Oscar approached the cat gently.  He sat next to his mom, then the cat reached up and scratched Oscar’s nose.  Oscar yelped and ran away.  His parents laughed.  He doubted they would do the same if he had hurt the cat.  This sucked.

Since that day, Oscar has avoided the cat.  He won’t go into a room where Kayak is.  This bothered Oscar’s parents much, and they prayed to the angels that Oscar would accept the cat and vice versa.  We answered that prayer and pledged to help Oscar get over his catophobia.

We began training Oscar with stuffed cats.  We asked him to lie down next to the faux kitty and fall asleep.  It took three days for this small step.  Then we had kind cat angels approach to play with him, and slowly he was cured of his cat fear.  But, there was still Kayak, who scared him a lot.

We all gathered around Oscar as he approached Kayak.  Each time he got a step closer before running off.  Finally, yesterday, Oscar worked up enough nerve to get within a paw’s length of Kayak again.  The cat angels had been working with Kayak, convincing her to be kinder to Oscar, or she could find herself in a shelter.  The dog and cat looked at each other warily.  Then Kayak moved slightly on the couch, inviting Oscar to lay next to her.  Oscar jumped up and snuggled close to her. The angels rejoiced at a job well done, and their mom was thrilled to see them together, even taking a photo and placing it on the Internet.

I noticed Oscar’s and Kayak’s eyes.  They betrayed their true feelings; they loathed one another. But they know they are going to have to get along for the family to survive.  Once again, pets lead the way

Posted by Foley Monster, Pocket and River Song at 5:44 PM