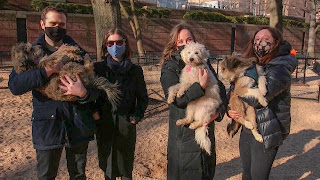 When dogs have litters, we know we only have three months together before being separated forever.  We are devoted to our people.  That is why we can’t keep our babies; it is impossible to give our whole hearts to humans and kids.  It is a tricky proposition.

It is even more challenging for a dog dad to maintain a relationship with his children.  Most of the time, they aren’t even there when the litter is born.  Their job is wham, bam, thank you, ma’am.

But, once a puppy starts becoming self-sufficient and stays with their parents, they bond, and if they are ripped apart after that, it becomes painful—the earlier the separation, the better.

Marvin, a Texas dog, was thrilled when two of his offspring stayed with him at their home. They became more like brothers than father and sons.  That did not interfere with his love for their parents.  But, when times became hard, their parents surrendered them.

Not long after Marvin was adopted, his son Leo found a home with another couple on the Upper West Side.  Leo’s dad contacted Dr. Doolittle for some information needed for the vet and was told that his birth father lived in the same area, and Leo’s brother was still looking for a home.

Leo’s mom had a neighbor who was looking for a dog.  She asked the woman to call Dr. Doolittie and ask about the status of Leo’s son Murray.  Thanks to some hard work by the volunteers at the rescue, and some angel magic, Marvin was adopted by the neighbor.  On a play date, an overjoyed Murray and Leo were reunited

The two dogs were brought to the park to reunite.  They were delighted to see one another again and barked, kissed, and ran in circles. All that was left was to find their dad.  Their owners knew he was living in the city but could not be told the name and address.  It would take some sleuthing.

Once again, we angels took control.  We got Leo’s parents and Marvin’s to walk down the same street simultaneously.  Leo’s mom barely paid attention to the strange dog, which he happily greeted on their walk.  When Leo’s mom got a sight of the other pup, she realized it looked precisely like Leo.  She asked the human on the other end of the leash how she got her little one, and within minutes they discovered the family was reunited.

Leo’s parents called Murray’s, and that weekend a dog family reunion was held at the park.  It was indeed a miracle that they were reunited, but that is what we do best.

Don’t ever give up on seeing someone in your family again.  Not when you have determined angels on your side.