River and Pocket Catch Up on Their Neighbors Pee Mail 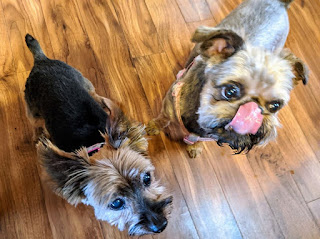 Dear Sweet Mommy: The snow has melted, the temperatures have risen, the sun is stronger, the days are longer, and it is time for Pocket and River to get to stepping and sniffing.

A daily walk is a chance to smell and discover what your friends did the day before, but the first few walks after a winter's hibernation provide months of information and can be overwhelming.

My sisters began their first sniff and walk at the neighbor's house where they found, sprinkled on a tree, the innermost thoughts of Samantha, the pit bull who visits the occupant.  "I am so tired of those yappy little dogs next door," Samantha peed.  "I would like to eat their little livers with some lima beans and a nice Chianti.'

"Now you have done it," River scolded Pocket. "Your incessant barking is going to turn us into an entree.

"Me?  I only bark because you bark, and I mistakenly think you know what you're barking at." While, to them, they were barking words, to the humans, they were emitting loud, high-pitched yips, which proved Samantha's point.

"No, but there's a stone in the middle of her pee."

"Oh, I hate when that happens."

They continued their journey to the front, where there are a row of rocks by the office and north of that the old yellow barn. Both are pee-mail hubs.

"Oh, my," Pocket said, after a long sniff under a rock.  "Do you remember when Mrs. Duffy passed?" River nodded.  "Their dog Brady says that Mr. Duffy killed her.  What should we do?"

Then they moved to the barn. While the rocks were mainly message places for dogs, the barn is a meeting place for dozens of species.  It is a Christian Science Reading Room of pee.

"Look at this; we’re invited to a party," Pocket said excitedly.  "It's in the woods at midnight."

River checked it out.  "That's coyote pee.  You go to their party; you’ll never come home."

"Well, should I rsv pee? I think not doing so is rude."

"You want rude try being the main course at a coyote keg party." River took a long sniff.  "This is interesting; it’s from a skunk. He wants us to boycott the new Space Jam. Movie because Pepe Le Pew is not in it. Supposedly his actions are demeaning to women."

"Isn't that the governor of New York?"

"What is the difference?"

"Come to think of it; ñone.  I think we should say we support Pepe. If there are two things, I want to stay on the good side of it is skunks and New York liberals with mob ties."

Pocket found another spot to sniff.  “Listen to this one:  I can’t stand my sister, and tonight, when she is sleeping, I am going to sneak up on her and bite her in the ear.”

“You can ignore that one,”

But I knew differently and, in an act of kindness, I fended off River’s late-night attack because I know what you read in the pee always comes true.