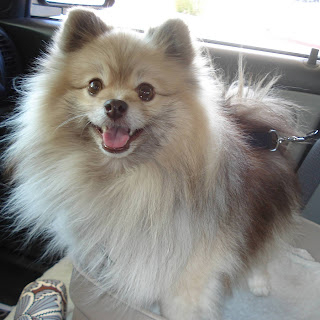 In his life, Hershey has always been in the top one percentile. He is more loved than 99% of dogs; he is cuter, sweeter, and more brilliant. When he went to the Bridge, he did so as part of the one percent but this time in a sad way.

Hershey was confronted with a myriad of health issues when he turned 12. He had a bout of renal failure, but a switch in diet improved his condition. He also had a persistent cough, which was diagnosed as an enlarged heart. Despite these challenges, Hershey continued to act like a puppy. Of course, he was masking his infirmities to keep his mom from worrying about his deteriorating condition.

When a dog is diagnosed with heart issues, its mortal existence becomes a day-to-day proposition. Hershey’s mama Patti was determined to make each minute with him memorable for the little man who captured her heart. She obtained every needed medication,  paid for prescription food, and had a ramp built next to her bed so he could climb down. She did not know it at the time, but her kindness and caring extended the number of heartbeats Hershey was assigned at birth and prolonged his life.

As time passed, Hershey’s murmur and cough grew worse. At the beginning of last week, his concerned mom took him to the vet. The doctor gave Hershey a thorough examination and determined while his murmur was worse, his lungs were clear, so he was not in heart failure. The vet prescribed medication and told mama Patti to watch over him, something she had done since he was a puppy.

The next day Hershey was his usual self. He took two walks, where he greeted the neighbors and accompanied his mom on a scooter ride.  Tired, he went into the bedroom and waited for his mother to join him.  Usually, after a short time, he re-emerged and insisted she accompanies him. But this time, he didn’t come back out.

She found her little love passed out on the bedroom floor, gasping. She contacted a neighbor who agreed to take them to the Emergency Vet,  but Hershey had too few heartbeats left and passed en route snuggled in his favorite spot:  His mom’s arms.

Upon learning of Hershey’s unfortunate passing, his vet contacted Moma Patti and informed her that sometimes a heart murmur could weaken the heart muscles, an undetectable condition.  It is rare, occurring in one percent of dogs.  Hershey, again, was in the top percentile, but this time he didn’t want to be.

I wish Moma Patti could witness Hershey’s crossing the Bridge,  his stunning transformation from a slow-moving senior to the pup he was when he first came into her life.   It may not be enough to curb Moma Patti’s sorrow, but it might do her heart well to see him reunite with the Sky, his angel sibling.

And, for the first time that I could remember, a human unrelated to the new angel was part of the welcoming committee. Angel Laura happily greeted Hershey and told him whenever he longed for a mother’s touch or a lap of kindness to come to her house where he would receive the treatment he deserved.

Since his arrival, Sky, Hershey, and the other angels whose lives were touched by Moma Patti have worked diligently to help her get through grief’s dark and silent gate and back into the sunshine where she can handle life without her handsome, joyful companion. It might take an entire village to help her, but there is one at Doggyspace always willing to help.

Judging by her sorrow, it might take all of us, but we won’t rest until she has a day where Hershey’s memories are sweet and not painful.

And hopefully, then she can love again.