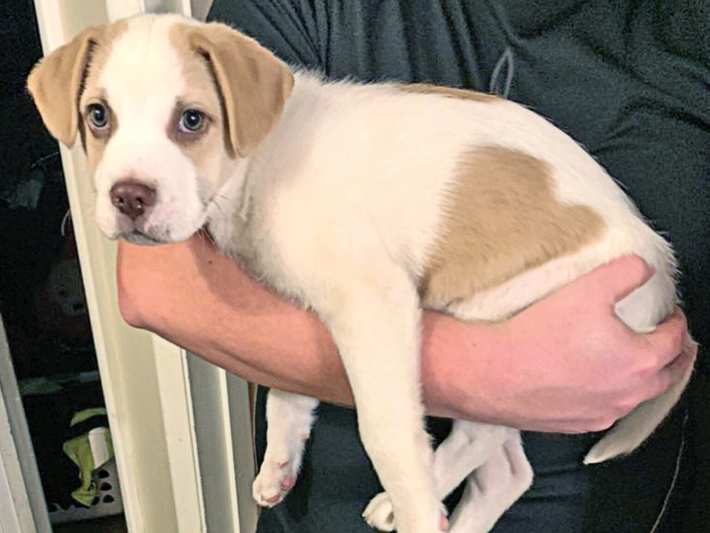 Koko and his mom had an unbreakable bond that stretched across the River of Life.  From there, Koko gave her mom the greatest gift:  Another dog to repair her broken heart.

Koko’s Mom, Melissa Baccaire, was a Middle School teacher who worked part-time at Nanimals Animals Nannies in Bath Township, Ohio, a daycare and border.  It was there that she met Koko.  When her parents got a divorce, neither party was willing to take the pup. As soon as Melissa learned of this, she offered to take the dog she had been caring for at the daycare for three years.

Everyone agreed that they would be the perfect match, and that proved to be true.  Every day the two became closer.   Koko was even the flower girl at her wedding.

The pup was her soul mate.

Much like me, one day, Koko developed a cough. Momma Melissa made an appointment with the regular doctor, but the malady became worse, and she took Koko to the emergency vet. She had to wait outside nervously.  The vet came out without Koko and delivered the devastating news that the dog had a tumor on her heart that had ruptured and she needed to be sent to the Bridge immediately. Momma Melissa negotiated to take Koko home for one more day of love and attention. The next morning she helped her beloved friend go to the Bridge.

Momma Melissa was heartbroken. She never thought she could love another dog. Koko was desperately looking for another pup to heal her broken heart and found the perfect soul at the One of a Kind Pets rescue in Akron. During a dream visit, Koko persuaded her mom to go there. She, in her subconscious, said it would just be for a look. Koko knew better.

The angel was concerned when she saw her mother had to wait in a long line to get inside, but Melissa decided that she could wait after traveling to get there.  Koko, who was the Pyrenees and knew that breed had a special place in her mom’s heart, had found a Pyrenees mix in the shelter, which her mom saw upon entering. She was immediately attracted to the dog. Momma Melissa made a play date to meet the pup the following day.

When Momma Melissa arrived, the dog was let out of her crate, and for the first time, Melissa saw why Kona selected her. On her side, her mostly white fur was brown and had formed into the shape of a heart. Momma Melissa took it as a sign and immediately said she would adopt the dog. In tribute to Koko, they named her Kona, who she knew lead her to this beautiful dog.

As soon as she was in her new home, the dog labeled her mom’s little angel; she began to replace her mom’s tears with smiles. Koko misses his mom, but she is thrilled to see that Kona made her Mom happy again, and she did it in record time. Kona was a gift of love across the Bridge. That is the most priceless kind.