Foley's Tails From Rainbow Bridge Stories: Louis and Miley Bite Off More Than They Can Chew 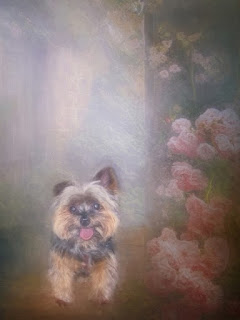 Some dog’s prayers can be pretty annoying. Luckily, they don’t reach the level of stupidity that human prayers do. They make requests that some millionaire gets a base hit or kicks something called a field goal.  Some dog prayers that come across my desk could be handled by the requesters if the dogs showed a little bit of grit.

Louise and Miley, two poodles living in northern California near the mountains, kept praying for guidance about what to do with the vermin in their yard.  The prayers went from paw to paw, with no one wanting to commit time to something the duo should have handled with some fierce barking.  They persisted in prayer, and finally, one day, when the duo’s parents were gone, I flew done as a guest to check on them.

I first checked out their yard.  There were a couple of bothersome chipmunks and fearless squirrels but nothing that the poodles couldn’t handle themselves. When I went to the house, I saw that they had a pet door installed, which was even more infuriating.  They could go out to the yard and chase away whatever came inside, while dogs who were locked inside could only bark.  These pups didn’t need angel intervention. They needed a life coach.  Fortunately, I do both.

When I appeared as a ghost, I had anticipated that it would scare the two anxious dogs, but they hardly reacted to my presence.  Maybe they were the kind of pups who are only brave inside their house.  I sat them down on the floor, landed on their comfy couch, and told them that they needed to be masters of their yard and that whatever out there was more scared of them than they were of it.  To rule their yards, so no animal dare come into it.

Louise and Miley thanked me for the talk and promised that they would rule the yard as I instructed.  Then  Louise jumped on the back of the couch and began barking.  “It’s here,” she said to Miley, and then the two of them ran out the door barking.  I was proud of them.  I looked out the window and was shocked by what I saw.  The vermin in their yard was a large grizzly bear.  Then  I saw Louise and Miley running at it with bared teeth.

I flew after them barking the word “no.”  I anticipated having to rush back to the Bridge and swear them in.  The bear then got on its back legs, roared, and ran for its life.

Louise and Miley ran around in circles barking in celebration.  I told them to get back in the house and suggested that they never bark at a bear and chase it away again. They laughed and told me why they would do that when they just got control of the yard?

All I could do is hope that they continued to frighten the bears and remained unharmed.  As I was flying back home, I passed a bear angel coming to the mortal side.  I asked him what he was doing, and he said he had to give a pep talk to a bear who was frightened by two poodles.

I agreed with him that it was strange and wished him the best of luck. I can only hope he is not as good an angel as I am.  If he is the next time Louise and Miley charged the bear, they might not be as lucky.

It should be fine.  Bears are fierce when they are mortal but cuddly at the Bridge. I was sure he would tell the bear to keep the peace.  At least I hoped so.