Hobo: Good evening: I am Hobo Hudson and welcome to Tanner Brigade Tonight TVTB’s look at the issues of the day. Our guest this evening is Independent candidate for Massachusetts Senate Pocket Q. Rocket. Welcome Ms. Rocket.

Pocket: Thank you for having me this evening Hobo. I am looking forward to your questions.

Hobo: Pocket, you live in the city of Taunton MA. Recently an eight year old boy was sent home from school and not allowed to come back unless he underwent a psychological exam for drawing this picture: The boy claimed it is a picture of Christ on the cross. Do you support the school system’s stance? 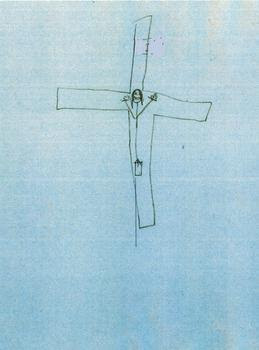 That’s the worst Christ on the cross I have ever seen. It looks like that girl Cathy from the Funny Papers being water boarded. If you allow outwork that bad to be in the classroom where does it end? You’ve got to figure out why this kid sucks so bad at drawing and make sure it doesn’t happen. Excuse me, I think my lunch is coming back up, oh boy, deep breathing, OK, just please, take that awful picture away.

Pocket: Oh yes, it is very violent. Did you see the Mel Gibson movie? Wow. I hid under the blanket. I did like it when they showed their butts to the British.

Hobo: I think you have the wrong movie.

Pocket: No, that was the movie I was hiding when it was on.

Hobo: Many feel that this was an assault on religion, that the teacher and principal suspended the boy because he introduced Jesus in the classroom. What is your opinion of religion in the classroom?

Pocket: Well, when my Mommy is working in the classroom I’m praying to the Bridge Gods that she come home and let me out of the crate. My Mom has a lot of kids from the Projects in her classroom, and lots of times she introduced Jesus. They pronounce it Heyzeus like a sneeze and their Dad isn’t home much either.

Hobo: Some blame this on the Massachusetts liberals. Do you see this a symptomatic of an overly liberal culture?

Pocket: Well, people say it’s the liberals, but the ACLU is suing on behalf of the family, so you have liberals suing liberals, and that’s like the Mets playing the Yankees, we don’t care who wins, we just hope someone suffers a season ending injury.

Hobo: Well I think you have given us a lot to think about.

Pocket: Oh I am sorry, I was hoping to give you a lot to nap about.
Posted by Foley Monster, Pocket and River Song at 8:59 PM