It is time for the unveiling of the Foley Monster and Pocket official Christmas picture. OK everyone settle down. I know, it’s like the lighting of the Rockerfeller Center Christmas Tree or the erecting of the National Festivus Pole, but let me give you a little background first.

At this point of our posing we had been photographed about 600 times. You cannot tell, because it did not appear in the picture, but there were tiny puffs of steam coming out my ears. I was tired and wanted a lap. When I am in the thralls of lap withdrawal I am six pounds of ferocious hell, my friends.

As for Pocket, never has a dog looked so resigned, so forlorn. She had tried it all, looking left, looking right, pouting, bringing sexy back; nothing pleased our camera obsessed parents. She laid her head on the blanket. The expression on her face was simple defeat.

The antlers had been strapped to her head for more than an hour. They could have attached a ball gag and the humiliation needle wouldn’t have quivered. Even I felt sorry for the poor girl. At the point of the picture’s creation she wouldn’t have aarfed a bark if they hung her by her back legs and shaved her like a hog in the butcher house.

We were lying down in front of the little village under the tree. I don’t know who would build a village under a tree. They must spend all year cleaning giant pinecones. Plus Pocket defiles the river nightly.

Daddy had the camera now. He was lying on the floor, slowly creeping towards us. Somehow the camera and I became on the same wavelength. I knew when it was frozen, not ready to take the picture, and Pocket and I posed perfectly; then, it would signal to me when it was ready. We’d turn away just as the shutter clicked. Daddy would look at the picture, and then the parade of bad words would begin.

But even that had lost it’s fun for us. Now we just wanted them to take the danm picture so we could get on with our lives. But picture after picture he couldn’t get the shot right (which was pathetic, considering the perfect subjects he had.) Finally, as Pocket settled into her manic depression and I grumbled the mumbles of dread, the flash flushed, and Daddy caught a pretty darn good pictures of us sisters from Yorkshire.

Mommy looked at it, smiled, and said “we can do better.”

So we sat for about another 100 pictures over the course of the weekend. But we need did to that one.

Which is this one: 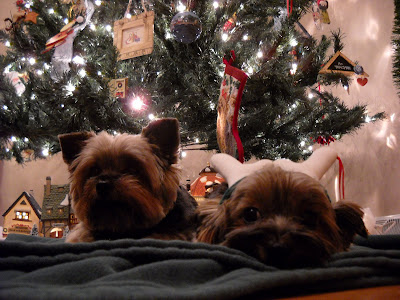 So Merry Christmas to all our Tanner Brigade, Facebook, Twitter and Blogger friends. You make every day better and we treasure you all.
Posted by Foley Monster, Pocket and River Song at 10:05 PM