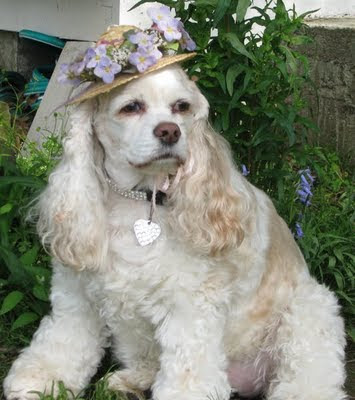 Well Pocket and I firmly entrenched ourselves in opposite camps when deciding this week’s Pup of the Week. But, as always in disagreements within in the Brigade, I sought out, and received, the sage advice of Tanner Bub at the bridge and he solved our problems in his usual reasoned and fair manner.

I do understand that Pocket had several excellent reasons to dispute my candidate. First of all, he is not a member of the Brigade, although his family is, and the way I see it, if you have a family member in the Brigade, then you’re in the Brigade. Secondly, this pup is at the Bridge, and while you can certainly be the Pup of the Week at the Bridge, Pocket argued there was a more qualified member.

Well, I must admit, that I got myself into both a huff and a snit. I huffed and snitted around the house all day. That night I decided to seek out the sage advice of my friend Tanner. I downloaded myself up to the Bridge and the pups were so happy to see me: There was Teddy, and Sophie, and my old friends Blake, Copper and Jax, plus so many more. After a wild time of chasing Bridge bunnies made of rawhide, drinking ice cold water, and feasting on the Snausage trees, we sat down to talk.

I told Tanner about the pup at the Bridge who was my candidate and Tanner put a paw on my shoulder and told me he knew exactly whom I was talking about. He then gave a special howl and that black furred pup came bouncing over the hills. I introduced myself and he said he knew who I was, that his Mommy had told him about Pocket and I in her dreams. I then showed Tanner and this pup the wonderful tribute his Mom wrote about him. This dog cried and made me promise to tell his Mom how much he missed her and loved her and how sometimes during the day he sits in the sun and thinks about her.

I told Tanner how I wanted to make this dog my pup of the week but Pocket had another dog in mind. Tanner said that he had the perfect solution. He had recently been elected Mayor of the Bridge and he was using his power to make this dog “Rainbow Bridge Pup of the week.” So congratulations to Cali and Hurley’s big brother Sami, as he is the first “Rainbow Bridge Pup of the Week.”

Then I downloaded myself back home and woke up Pocket to tell her she was right. She had no idea what I meant and it took me several hours to explain the concept.

So, I admit, Pocket was right, and our Pup of the Week is very deserving. She had to go to the vet this week and have an operation, which is one of the worse possible things. First there’s the no eating, then the Mommy leaving us at the hospital, then the going asleep and waking up feeling all groggy with no Mommy in sight.

Then Mommy picks you up, and she’s happy to see you, but all worried, and you need to take care of her, even when you don’t feel well. Plus we all get worried and we spend two days praying for the Doctor to call up and say B-9.

And then guess what, the Doctor called up and said B-9 and we all yelled Bingo and danced and sang and had a huge party.

So, for being a brave pup in going to the Doctors; for putting up with all those humans at the hospital poking and prodding her; for being brave when she woke up without her Mommy there; for going home and taking good care of her Mom when she was so worried about her; and most of all for being our Bingo Dog and being B-9! Saffron is our Pup of the Week.