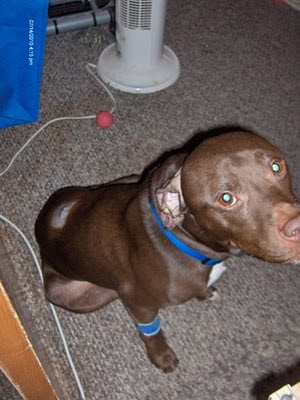 What a difficult time we had this week picking a Pup of the Week. Who to go with? There is Kady who is having her patience and love tested by a new blob. There is Otis who managed to save his life by swimming across the pool after a viscous squirrel pushed him in. There is Shiloh who traveled half way across the world and did an excellent job in an off leash competition. But there was one dog who's story had us on the edge of our tail all week long.

Junior Johnson had something wrong with his ear. Now human ears are nothing compared to ours. Ours turn, they go up, down, they can be floppy or alert. Us dogs we literally wear our emotions in our ears. We can also hear things that you humans can't. You know when someone silently breaks wind and everyone blames everyone else and then you blame the dogs. Well we heard it humans, you're not fooling anyone.

But do you know how hard it is to here something like that with an aural hematoma? When I heard that this was the affliction that had caused so many problems for our friend Junior I went to Dr Pocket and asked what this was. She told me he was the foreign guy who can't design outfits on Project Runway. Sometimes I have concerns about her credentials.

Our poor Junior's ear was puffy and filled with blood like a pastry a vampire would buy at the True Blood Starbucks. This is such a painful injury it would cause Bret Farve to retire twice before deciding to play. The Dogtors were able to fix it, but poor Junior had to stay in the hospital in a cage all alone at night. If she had come to Pocket General Hospital we would have set up a wonderful bed with blankets and pillows on the floor, make Daddy sleep on it, and given Junior his spot in the bed.

Then they put a tube in his ear. I am an older dog and I can teach you younger pups something important here. You don't want them to stick a tube anywhere. Particularly anything with four letters: ears, eyes, anus, feet, legs, whoo whoo, none of those things.

I don't know how Junior made it through the night. But then Junior's Mom came for him, got him some medicine to make him feel better, and brought him back to his house of love. Junior, you are such a strong pup, I don't think I would have been so strong. I admire you.

You got home, you did your business, you laid down the law with Chelsea so there was no unnecessary roughness, took your medicine, and even if you cried a little not being in your Mom's bed (if you were at Pocket General you would have but you were better off at home) you were still one tough little nugget.

So for being such a strong, brave, dog, and showing us all how to face surgery, you are our pup of the week.
Posted by Foley Monster, Pocket and River Song at 10:38 PM