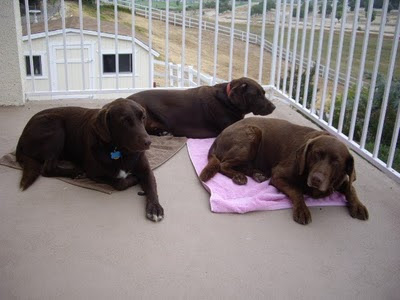 It seems we spend so much time writing Pups of the Week for friends who have either gone to the bridge, or are waiting to hear if their ticket is pending, it is a treat to write one for pups who have returned home.

This week Reba, Dodger and Logan finally came home, to their Mom, and to the Brigade. (Please do not confuse our Brigade with the one on the silly show about abandoned humans in the pound, it's called Big Brother or something like that. We are filing papers to sue those abandoned humans for illegally seizing our intellectual property.)

They left us under some mysterious circumstances. One of those human things. We missed them right away and pestered them to come home but there was much drama in their lives.

Their Mommy was selling their house and moving down the coast to a new city called San Diego, which I have it on the best of authorities means "A whale's vagina."

Moving a human to a new home is very complicated. You would think that it would be easier then moving a pup, with the tag team of drivers who bring us to our new home, but Mommy and Daddy are planning to move to a new house in the same city we live now and this seems very complicated, so I cannot imagine how hard it is to move to a whale's vagina.

As sometimes happen when humans move, especially when they are working, they don't get a new place for the pack to sleep before they start their jobs. So they become lodgers. The first place they lodged was at their Aunt's house. We have an Aunt, but have never met her, and Mommy does not like her, so we don't have good opinions of Aunts. I really didn't understand in their blog what they were saying about their Aunt but it sounds to me like she was drinking more than her share of water and blowing the vuvuzelas which scared Dodger, so they had to bug out and find a new place for their pack to plop.

They went to their Grandpops home, but that was sad because he had recently gone to the bridge, and their Mommy was heartbroken. As much fun as they had chasing the vermin at the house, they missed Grandpops. It was a familiar home, but not their home.

Mommy got to their new home first, but accommodations needed to be made to make for it to be safe for our friends, and to get this done she had to rely on contractors, and contractors are as reliable as cats. Instead of working they prefer to sit in the sun, drink, and lick themselves. Actually, so do I. But hey, we don't pretend to be working for you, like contractors....and cats.

Finally the work got done and the pack was back with their Mom and finally back where they belong with the Brigade (The Brigade is a fully registered trademark held by Foley Monster and Dr Pocket Dog, any unauthorized use of this trademark and we will mess you up, seriously, don't push us on this.)

So, for being the prodigal dogs, and finding their way back to their new home, and to us, Reba, Dodger and Logan are our August 15, 2010 pups of the week.
Posted by Foley Monster, Pocket and River Song at 5:36 PM