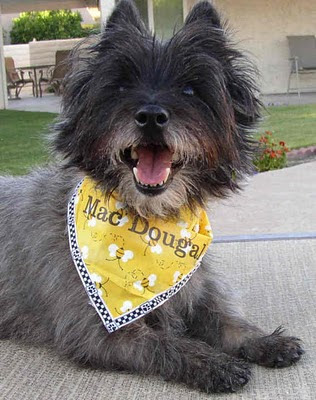 There is no predicting when hard times will come. There could be a bad snow storm that makes your roof collapse on Thanksgiving. A twister could hit the homestead on the Fourth of July and put your gas grill in the crik. On Christmas Day those sons of a bitches the Bumpuses could let their hounds loose, they could steal your turkey dinner, and you have to eat holiday dinner at the nearest Chinese restaurant. (This happens a lot, like every two hours on Christmas Day, according to the big truth telling machine in the middle of the living room that fills us in on so many human secrets.)

And sometimes hard times comes on your birthday. Like our wonderfully special friend MacDougal. He just had a birthday last week. But it looked like there would be no party, no streamers, no hats, no balloons, no heffalumps jumping out of cakes.

You see last year MacDougal's Daddy was called to the Bridge in the time around his birthday. I don't know why humans put so much emphasis on dates, but they do. When the calender counts down to that day human sadness grows, then breaks, and tears flow. All us pups can do is lick their tears, wag our tails, and try to cure their broken hearts with love.

So it didn't look like we would be celebrating MacDougal's birthday this year. And we all understand. Sometimes Mom's hearts break and we all must respect what pups have to do to heal their Moms.

But when the day came, guess what? MacDougal's Mom came through for him like a champ. First she went out and rented a beer fountain. Oh boy let me tell you there is nothing like a beer fountain on the hot days that we had here. It was truly a stroke of genius.

To help the beer down Mommy followed it up with some Frosty Paws. Beer and Frosty Paws are better than a day at the ball game. Then we all dug into Hattie's Leaning Tower Cake. Among her many other talents it seems that Hattie is our Cake Boss. She has Fella doing the frosting. Everyone who works for her is Mia Famiglia.

And that caused our little friend to do what she does best. She tooted. She did it over and over again, and we all know the power of her toots. I know where we live it caused all the humid air to be pushed out to sea. They said so on the big truth telling machine. The never accurate weather man said the humidity went away from a small amount of flatulence being released in Southern California.

So, for having such a wonderful Mom who would not let your birthday go by without a celebration despite her pain, for always bringing a big smile to our face, and for having the most powerful toots we know, MacDougal is our pup of the week.

Now does go wasting those toots. Who knows when the next natural or man made disaster will come and we will need them.
Posted by Foley Monster, Pocket and River Song at 8:40 PM