Puppy, Wishbone, Zafaria, Duke, and the Paula Malatesta Pack are our January 23, 2011 Pups of the Week 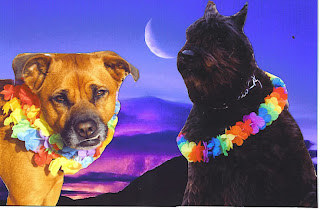 I would like to tell you all that I remember every blog you have all written.  Of course, no one can.  Not even humans.  Humans stand in bookstores studying the back covers of books trying to determine if they have read these 440 pages before.  But there are certain blogs:  Moses, Tanner, and others going to the bridge that stick with you, plus some very special stories.  One such story concerns one of the members of the Pack the make up our Pups of the Week:  The Malatesta Clan.

Wishbone was rescued from a hunter who found him worthless because he was not a good hunting dog.  Well, the Pack's Mom, Ms. Paula, had a different plan, and she rescued Wishbone from that bad man.   But Wishbone, being a free spirit, made a run for it one day.  Ms. Paula was heartbroken.  But she never gave up hunting down this hound.  On a Sunday, leaving church, she saw Wishbone, ran after him, tackled him, and rolled down a hill with him, holding on, then safely got him in the car and home.  After reading that story I said wow, now that's a Mom.

Ms. Paula is a superhero for dogs.  If you are trapped in a puppy mill you dream of Ms. Paula coming zooming through the night, taking out those bad people who are holding you in a small cage filled with fecal matter next to stale water, taking you with her, staying with you, and finding you your forever home.  She doesn't make it to every dog.  But she wants to, and that is what matters the most.

You could say that we could just name this Mom of the Week, and it would be fitting.  But bark yourself this.  Why?  Why would a woman devote her life to this?  All I can figure is that somewhere in this special woman's life she must of had a least one, but more than likely dozens, of wonderful pups who inspired her.

One of the dogs she named The Dude perhaps after Jeff Bridges' pot smoking slacker from the Big Lebowski.  This pup had no chance of surviving the kill shelter it was in.  But Super Paula swooped in and saved The Dude.  For two years she fostered The Dude, never giving up on him, even when two families brought him back.  Finally The Dude has a new home..  Who has such patience to never give up on a dog even after two years?

In the first week of the year she drove to Greenville N.C. and rescued 14 dogs.  That's 14.  Some were puppies: but 14, that's more than a football team.  She put them in her van and took them home.  My parents can't manage 14 fish in a tank.  14 dogs?  But what do you expect from a superwoman?

Then she got called out to rescue a Pit Bull named Skunk.  That doesn't seem like a good combination.  She got there but the pit bull had been rescued.  So she still rescued some Boston Terriers who had their tickets punched for the bridge.  Two more dogs rescued by Super Paula.

Just how special is Super Paula?  She went to a farm to rescue some pups to find only two of them not killed by their owner.  One of the two, Zafaria was terminally ill.  Instead of having the pup put down she put her on chemotherapy to save her life, then took her to senior citizen homes so she could pay forward the love and life she got from Paula.  She doesn't just save pups, she brings joy to the elderly through these pups.

And she is having a wonderful effect on our Moms and Dads.  I am seeing more and more of them sign up for doing transports or fostering pups.  Even Daddy has signed up for transports although he hasn't done any yet.  Of course, given our Daddy's driving, the pups may be better off taking their chances with the farmer and the gun

Last week, in my recommended blogs of the week, I linked to a site about the dogs of Brazil.  The authors of this blog have been severely effected by the floods in Brazil.  They have been traveling around their neighborhood trying to help the dogs who were abandoned or lost their families and are starving or sick.  The streets are full of them.  It is a truly tragic situation.  I know if she could, Miss Paula would be down there fighting for those dogs too.  If you would like to read the blog click HERE

So let's raise a paw to the pack that we respect the most, the pack we would like to be when we grow up, the pack that we wish we had the strength and passion to be, the pack of the week, Puppy, Wishbone, Zafaria, Duke, Khan, all the other wonderful dogs who are, or have been part of their pack, and the wonderful Mom Ms. Paula.

Posted by Foley Monster, Pocket and River Song at 10:47 PM