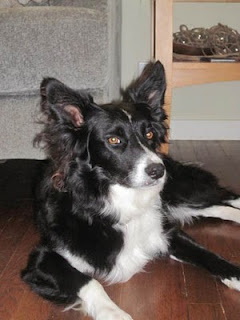 Poo.  For something that humans build special chairs with water at the bottom to dispose of it, that needs to be picked up and disposed of wherever we may leave it, and for something that is so reprehensible that, if left on the rug, humans get very angry, it sure is important.  When humans have explosively bad poo they chalk it up to a bug that's going around or some bad food.  They don't worry about it too much.  But you know humans.  They have severe chest pains they wait to see if it will pass but if their check engine light goes off on their car they hurry to a mechanic.

Our good friend Hurley has had poo problems lately, and thank God his Mom, the wonderful Miss Nancy, is a certified poo inspector.  Hurley has been on and off medicine for blood in his poo for a few weeks now.  When the last cycle of medication ended we all hoped that Hurley would be fine.  But then bloody, explosive, poo began to be sprayed on her family members, and it was time for a trip to the kindest vet I have heard of, Dr. Apple.

Dr Apple did what dogters do, scare, and harass us desperately trying to make her better.  She had a pic line put in.   I don't know what that is but I don't want one in me.  There were needles stuck in her, blood drawn, x-rays.  Oh just the worst things.  Luckily kind Dr Apple let her go home with her Mom who didn't mind for a second her explosive butt juices, just wanted her home.  But Miss Nancy, as any Mom would be, was wracked with worry.

Now after a day like that how many pups do you know who would go to work?  Well Hurley did.  Miss Nancy wanted to keep her near so she went to work with her Mom.  They got the blood tests back which were negative, which is good, another thing about humans I don't understand, why negative is good.  Of course even at work Hurley wanted walks and toys to play with.  She did eat grass, and Hurley, girl, that is something you have to stop because that is not helping you so please  it might be time for you to take a trip to the John Deere rehab clinic.  There was no food, and there was some nasty farting.  There was poo, not bloody, thanks to the medication, but still no answers.

Then came the answer:  Cryptosporidum.  You can read about it HERE.  I am not going to lie to you my friends.  This was not a great diagnosis.  Basically it is a parasite living in Hurley's digestive track.  It is known in feral animals.  If your pup becomes in contact with traces of fecal matter from other animals, or licks from a puddle that an infected animal has drank from it can come in contact with this parasite.  It could also be in the pups system for years so it could be something she contracted as a pup before she came to Miss Nancy and it is just showing up now.  So for you parents with outside pups:  Scared yet?  It is also common in humans.  It is usually transmitted into the water supply from feral animals.  You can also get it from your pup if they are mouth lickers, but only if you have auto immune deficiencies, which thankfully neither Ms. Nancy or anyone in her family have.

Much credit must go to Dr. Apple who diagnosed Hurley.  It was the first time in 36 years he has had a pup with this parasite.  There is no agreed upon cure for this parasite.  Dr. Apple has Hurley on the human drug amoxoicylin.  He believes it will wipe out that nasty old parasite and Hurley will be fine.  There have been some miracles to get Hurley to this spot.  The test for Cryptosporidum has only been around for six months.  Miracle one.  That Dr Apple was smart enough to run the test and make the diagnosis was miracle two.  Now we're counting on a third miracle.  That the bad parasite is killed off and Hurley gets back to new soon.

Hurley, Cali and Miss Nancy are the nicest, kindest folk who have had more than their share of heartache.  Such kindness should be rewarded not punished.  We love them very much and want nothing but sunny days and Hurley chasing her frisbee in the future.

So far so good on the treatment but the question will be once the drugs are done if the bloody poo goes away.  If not, more drugs.  So I know I've asked before, but let's keep the prayer chain going for our friend Hurley sos he can keep chasing frisbees and keep Miss Nancy's heart from breaking.

Keep flying Hurley, we will be the wind that lifts your to that frisbee called a long life.
Posted by Foley Monster, Pocket and River Song at 9:59 PM

Email ThisBlogThis!Share to TwitterShare to FacebookShare to Pinterest
Labels: Hurley, Pup of the week