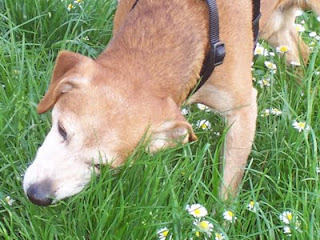 It's time to use our paws to dry our tears as we leave a good friend behind.   We our a Brigade. Dog soldiers in the fight for the freedom to bark.  We have praised our comrade, comforted his family, and will keep Bo in our heart for a long time.  We will stay in contact with his parents and siblings, giving them a paw to cry on, as we push forwards on our journey.

With each member we lose we become stronger, because it give us another angel on our shoulders.  These angels watch over us to make sure nothing bad happens to us before it is our time.  So let's celebrate a friend who, with the aid of the Bridge Angels, got a good diagnoses and will stay comforting his Mom for many a day.

In June we learned that our Italian friend Paco had a bad blood test.   His liver was not working properly.  In fact there was a chance it was liver cancer.

There was so much going on at that time.  Bo had been diagnosed.  We heard that Saffron might be sick.  We did what we always do.  We rallied to all their sides, but Bo got worse, and we stayed near his side, and Saffron got better and we celebrated.  Meanwhile all poor Paco could do was wait for his tests to come in

Paco said they were waiting for the results of an echography.  Yeah, me neither, must be an Italian thing.  But anything with graphy in it that is not an etch a sketch is bad news.  So we prayed very hard, without being sure what we were praying for except we wanted Paco to be all right.

Poor Paco had to go for a series of ten shots.   And I doubt he got a treat after any of them.   Although I do think people are much nicer in Italy, they invented the sausage which begot the snausage so we owe the people of Italy a great debt.    His Mom was very worried about him, as we all were (I hope he knew this.  There was so much going on with Bo and Saffron at the time, but we were thinking about Paco, loving him, and visiting him in our dreams.)    Finally, on the 7th he had his echography.    I don't know if you know this but humans have to pay when they get graphies done, either through green backs, notes written on little, long note pads, or those little plastic cards with the number that are fun to chew but get our parents so upset when they are found bit, folded, and spindled.    Well we dogs have to pay too.   Since we don't have any of those things they make us pay by not feeding us.  When is anyone going to do anything about the health of dog care in this country? Or Paco's country!  Geez any country!   No!  Breakfast is too high a price to pay.  Paco was so upset at this outrage while he was on the table he was trembling with outrage.    But it was worth it when he found out that there was no cancer!   The liver was inhomogeneous.    No, don't know what that means either but it was because of words like that that I invented Google so go check it out.  He also has a small heart problem but nothing that should be a major concern.

So our Paco is going to be with us for what should be a good long time.  And I bet you the Bridge Angels had something to do with it.   So as always a tip of our tail to our angels, thank you for helping Paco, you too Bo.

For being the first one helped by our new, stronger, Bridge Angels, and being just about the sweetest dog we have ever known, Paco is out July 10, 2011 pup of the week.

Posted by Foley Monster, Pocket and River Song at 9:16 PM

Email ThisBlogThis!Share to TwitterShare to FacebookShare to Pinterest
Labels: Paco, Pup of the week, Tanner Brigade