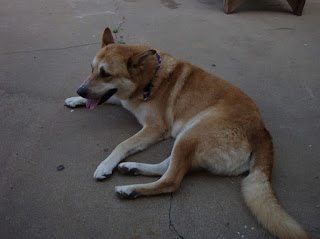 I know I spend a lot of blog space complaining about things in my little life. But occasionally I hear from a long absent pal and I realize I have very little to complain about.

I had not heard from my good friend Apollo Schulz in awhile, which is not an unusual situation, since we do tend to lose touch with our Bridge friends. All we want from these Angels is to watch over and protect their families and boy does Apollo have work to do now.

The suit of skin, bones and fur he wore here are buried under a rose bush in his Mom’s yard, and sometimes, when she is feeling blue, she goes there, to sit and talk to Apollo.

She talk about the baby of the family Czar who Apollo never met in this realm. Czar has been a terrific pup, but has a bit of the Foley in him. He is stubborn as a suit. But that keeps his Mom busy and her mind off of other more pressing things.

They talk about Napa. The last time I wrote about this pack was about him He had been attacked and badly injured at a dog park by malmannered dogs. Napa is better, except for a limp, and he has become Apollo’s Mom constant companion like Apollo had been.

Apollo and his Mom talk about what a good alpha dog Shakia has become. She is the protector of the family. She has become a Daddy dog as some girls do.

And they talk about the baby who was closest to Apollo, his little brother Ace who, at 12, is slowing down and likes lying in the sunshine which is a lot like me.

But the most important thing they talk about is there Mom’s health. Some of you may remember she has asthma, but now she has a new, and more serious problem. Apollo’s Mom had undergone a kidney transplant on January 5, with a kidney donated by her son. I know I don’t have to ask but to help Apollo’s Mom and their wonderful pack we are going to have to do some major praying, generate a lot of positive thoughts, and get the Bridge Angels like Apollo to keep an eye out or her.

So let’s start praying so Apollo’s Mom can return to Shakira, Ace, Napa and Czar and be with them for a good long time.

Don’t worry Apollo, your friends are with you.