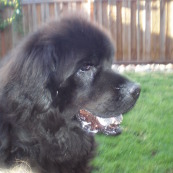 I was having a conversation with our friend Bauser this week and we said it seems like we have known each other our entire lives.  We feel the same way about 12, which is why when 12 became sick this week we were all so worried.

He had to go to the doctor hospital with pneurothorax.  I don’t know what that it is but it sounds very scary.  They also thought he developed a bacterial infection and we know what that is and that’s very scary.  They gave him some antibiotics and said he should respond well, unless it’s something worse, which would be even scarier.  In short, we’re scared.
We sent out lots of healing prayers to 12 and to his Mom and Dad who love their big boy quite a bit.

12 contacted us the next day to say he was in good spirits but had pockets in his lungs, which, if they ruptured would collapse his lungs. Plus our big friends wasn’t eating.  Pocket and I grabbed each other and trembled in fear.   Then we prayed and sent out even more good thoughts.

We breathed much easier when we heard that 12 was headed home.  Hattie Mae made him a comfy bed and put on soothing music for him.  I tell you if that girl wasn’t fixed I would start to get ideas.   He was taking his meds and tried to force down some chicken because he knew it would make his mom proud.  His liver and kidneys were good.  The dogtor said his weight needed to go up.  Who would have thought 12’s problem would be not enough weight?  So while we were feeling better, we were still consumed with worry.

Then we received words that the dogtor wanted more x-rays.  Man, what is it with these dogtors?   A bunch of us decided to upload ourselves to the doctor’s office and wait outside for 12.  Boy were the people at the office surprised when we all came flying out of their computer screens.  But when one of our close friends is sick we are there.

The dogtors came by and we all gathered around.  He said. that 12’s pneumonia was getting better.  He had to continue with his antibiotics and “steam baths.”  We all decided “steam baths” sounded very nice.  He also said there were masses in his lungs.  Our tails simultaneously went down when we learned this.  Masses aren’t good.   He said that they could be cancer but there would have to be surgery to find out.  We began to debate the pros and cons of surgery when 12 came out of the examining room.  Our tails perked up and we hurried to him.  We all gave him our various opinions of what he should do.  He thanks us but said it was going to be up to him and his parents.  We all gave them a kiss on the head then took over the computers so we could upload ourselves home.

When 12 got home he sat down with his parents and hammered out an agreement.  They would keep him happy and comfortable and he would try to eat rotisserie chicken, cheese and hot dogs, as long as it’s hand fed.  .  Not a bad deal.

So please say a prayer for our friend 12, and on the 2nd stop by and see him was we will celebrate 12’s eleventh birthday.

12, you are an example for dogs everywhere, a dogs dog, and I can’t wait to dance with you at your party.