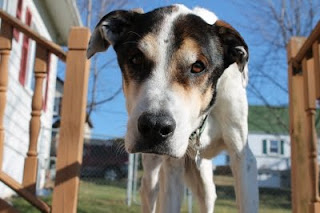 There have been so many tributes written about our friend Bikset, all of them deserving, that you might question why another is needed. It’s because we all feel the need to do something to honor Bisket, and to try to do something to heal his Mom’s broken heart, by conveying how much Bisket touched our lives, through the written word.

I think we all know of Bisket’s illness and subsequent trip to the Bridge. It began around Halloween and lasted three months. So quick. Us dogs can go from healthy to the Bridge in such a short time. It’s like you’re standing on a mountain top, and you slip a little, and then you keep falling, faster and further, until you hit the bottom and break apart.

I don’t need to recount what has justifiably been written a hundred times, Bisket’s unbreakable loyalty, his love for life and his friends, the joy and peace he brought to his parents, his kindness, his, for most of us, through the written word, becoming parts of all our families, and how his passing became like one of our own dogs passing.

I would like to write from the perspective of a pup. You see, when we are sent to Earth, we are given an assignment, find our human(s) and give them every last measure of our devotion, and, when we are done, to return to heaven and wait at the Bridge. Sadly some pups never find their humans, but the lucky ones, like me, and Bisket, do.

But in our final days we do ask ourselves, did we do enough, did we give that last true measure of devotion. Bisket’s Mom Gretchen and his Dad Matt left no doubt in his mind that he had given them everything he had when they showed him how much he was loved. Three nights before his scheduled surgery, when his parents were accepting that chance of good news was slight, Bisket and his Mom slept on the floor together because she was afraid he would not make it through the night, he had been drooling and smacking his lips. Neither slept much, and their cat Tien sat watching them all night (never good to have a kitty stare at you) but Bisket made it. Having your Mom stay up with you all night, especially on a cold uncomfortable floor, means you did it, if she is willing to do that for you, you’ve done more than your share for her.

In the days leading up to the vet’s decision Bsket let his Mom know it was time, by not eating, by sleeping, by not being able to go outside. He knew his Mom would do what he needed most, even though it would crush the heart he had protected for so long, he knew that she would let him go.

The night before the trip to the vet his Mom and Dad spent the night up with him, holding him, telling him how much he had done for them, letting hi, know his work here was done. Before they left they gave his brother Slater a chance to sniff him goodbye and or Tien to give him a kiss on the nose.

The vet told them what they already knew. There was nothing they could do. Bisket’s Mom and Dad were there to say goodbye. He was put on a fleecy through, a nice touch by the given the drugs, and awoke at the Bridge. And in their final act of devotion they brought him back home, to give him a forever resting place in the yard.

Posted by Foley Monster, Pocket and River Song at 8:45 PM