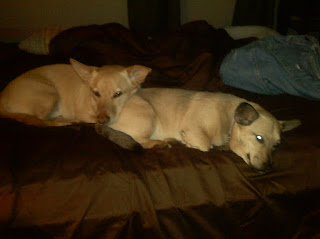 We have chosen to honor our wonderful friends Pokey and Maggie not for their many achievements in advancing the cause of dogs, but to recognize their wonderful Mom, Auntie Laura Lunn, whom fate has once again struck down with a non life threatening but still big pain in the ass injury.

Aunt Laura does not let people know of the obstacles she has faced in her lie, obstacles that would make a lesser Mommy hide in their home. But she is the most adventurous Mom I know. And she has the perfect attitude for a dog’s Mom to have. When we arrived for our visit she made us feel at home and told us that is was a dog’s house. It is awful nice of Pokey and Maggie to let her sleep inside.

As many of you know, two summers ago, Aunt Laura had a terrible tragedy happen at home when a dog she had recently adopted, that had undisclosed anger issues, attacked her while she was petting him. The poor dog, who did not know what it was doing, ripped off most of Aunt Laura’s muscle on her forearm. She left that aggressive dog at home, and while bleeding a great deal, scooped up Pokey, made sure he had a safe place with a friend and drove herself to the hospital. What followed was months of painful operations and home confinement.

Despite having a bad experience adopting a dog Aunt Laura did not turn her backs on those pups who have not found their humans yet. First she adopted Maggie and except for a few things chewed up that shouldn’t have been, a few holes in the lawn, and one daring but ill advised prison break, she, Auntie Laura and Pokey have gone together like peas and carrots, and, um, more carrots.

And not only did she adopt another dog but she became an advocate for dogs who haven’t found their parents yet. Every week it seems like she is taking time to drive dogs searching for their forever humans for one point to the other, like a conductor on the underground puppy railroad.

But she injured her foot, and for us dogs in New England Aunt Linda hurting her foot is like Rob Gronkowski hurting his foot. Without Aunt Linda the dog transporting machine just don’t work.

For such a wonderful woman, she has had more than her share of problems, but she never lets it get her down. She always has pleasant comments and good advice for everyone, although it is rumored that she is a bit of a shark at Friends With Words. Her play of Zat got Alec Baldwin thrown off a plane.

Aunt Laura is an inspiration to dog parents everywhere. If they could all handle their pups’ digressions, their pups’ personality quirks, their pups’ great escapes, as well as their own medical problems with a smile and nary a complaint then they will surely be a woman my pup!

Get well soon Aunt Laura. We love you.
Posted by Foley Monster, Pocket and River Song at 9:53 PM

Email ThisBlogThis!Share to TwitterShare to FacebookShare to Pinterest
Labels: Pokey and Maggie, Pup of the week, Tanner Brigade