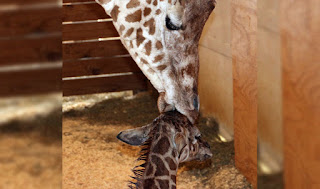 When I was a young dog, living in Foley’s shadow, trying to measure up to my famous sister, the attorney, I made claims that I was a doctor.  I even placed ads on animal social networking sites.  I soon learned the only reason Foley let me practice medicine was that she was cleaning up on malpractice suits.  I immediately took down all the ads and stopped my medical career.
At least I thought I took down all the ads.  I had advertised on individual zoo sites about being a midwife.  There, it remained without response, until last weekend.
I got a message from April the giraffe, who needed a midwife.  I tried telling her I was no longer practicing but have you ever tried to reason with a giraffe in the midst of a two-month long labor?
I dug out Foley’s codes to download herself through the Internet tubes, and I punched them into the computer, then jumped on the keyboard, and was transported to April’s exhibit.
She was walking around in tremendous pain.  “Midwife Pocket, I am tired of being pregnant, tell me what to do.”
I looked up at the giant beast.  I had to keep darting around because one misstep by her would squish me.  I thought about all the pregnancy scenes I saw on television.  “Breath like this,” I said. “Woo woo woo woo woo woo woo woo.”
She breathed “woo woo woo woo woo woo woo woo.”
“Let me check your progress,” I said.  I ducked under April and looked up.  My, that was a big opening.   Suddenly a baby giraffe stuck it’s head out and said “Helllooooo!” then popped back inside.
“Hey you, baby giraffe!” I yelled.  “You get back out here right now.”
The baby stayed inside and said, “Sorry, no one is home, come back later!”
I almost got squashed by a giant hoof.  “Baby giraffe!” I yelled. “You need to come out, it’s your birthday.”
“My birthday!” it yelled.  “Then he fell right out to take part in his birthday party.”
After months of preparing for this birth you would think the zoo would have put a net under April to catch her offspring, but no, it just fell out, right on top of good, old, Pocket   The President may think he is doing damage by dropping the mother of all bombs but he should really be dropping the sons of mother giraffes because when those land on you they mess you up!
Once a baby is born there is no use for a midwife.  I slipped over to the computer and uploaded myself back home.
Then I made sure all posts about me being a doctor was erased from the Web.


But this was a high-profile pregnancy and I wouldn’t be surprised if, after my success, Pocket the midwife is called upon again.