Jasper and Sophie Rae are our November 26, 2017 Pups of the Week 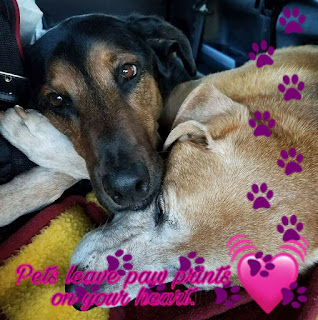 There is quote is from the song “It’s Quiet Uptown” from the musical Hamilton written by Lin Manuel Miranda about learning to live with the unimaginable.

The song is sung by Alexander Hamilton and his wife Angelica after their son is killed in a duel.  They are both broken with grief.  They are learning to live with something so sad and shocking it is unimaginable.

This week, the family of Jasper and Sophie Rae, plus all their friends, are trying to live with the unimaginable.  Ten days ago they both were living happily with their parents.  Over the course of two days, last Sunday and Monday,  Jasper and Sophie went to the Bridge, leaving their devastated family behind

Jasper’s passing was long feared, but not unexpected.  He has been having seizures for months.  Weeks ago his parents were preparing themselves for his journey to the Bridge.  But then his medicine began to work, and he improved to the point he was able to go on a family vacation.

Sophie Rae, who is five years old, watched after her brother, who was twice her age.  She developed a limp, something every dog does occasionally, and no reason to worry.   Her parents took her to the vet, who had diagnosed her with a sprain. But the limp was not improving.   On a subsequent check-up, the vet elected to do an x-ray which brought the most devastating news.  Sophie Rae had bone cancer in her front shoulder.  There was no surgery to be done, no chance of a cure.  She was one jump away from a devastating leg break.  “We never imagined Sophie would go first,” her mom wrote on Facebook.

Tragically, she didn’t.  Jasper was having seizures before Sophie’s grim diagnosis, but after that awful news, Jasper’s seizure became more severe and closer together.  His parents were given directions to stop these cluster seizures, but nothing worked.  Jasper’s father took him to the vet, but there was nothing they could do.  Jasper was sent to the bridge that night.

The next day Jasper and Sophie Rae’s parents set her to the Bridge too.  Jasper had somberly waited for Sophie to arrive.  There were the huge clouds of tears and the sounds of sobbing echoing across the river when they were reunited.  We greeted our new angels, hugging and kissing them.  We expressed our concern for their parents, but Jasper said he knew they would survive because they had one another to help through this awful time and nothing, not even this senseless tragedy could break that bond

In past years I would have demanded the Big Guy give me answers about this senseless tragedy, but lately, the cave at the top of the mountain has been closed for repairs.  I didn’t want an answer.  I knew life is hard, cruel and horrific.  I was tired of making sense of the senseless.

This morning Sophie came to see me.  She and Jasper had a secret.  Sophie knew Jasper did not have much time left so she gave him some heartbeats so he could stay with his parents longer.  It was an incredibly generous gesture but, sadly, when a dog does this, they are never sure how many heartbeats they have.  She assured me she would have made the same decision if she was aware that her pulses were dwindling.  Jasper made her parents happy, and she was honored to sacrifice for him.

In every tragedy, there is sacrifice and love and even hope for tomorrow.  Jasper and Sophie are committed to seeing their parents, who they know are the best parents in the world, provide a loving home for another dog when they are ready.  The position of being a dog in their family is highly sought, and they are already conducting interviews so they will be able to tell their parents which pup to pick when the time comes.  Sophie, especially, is willing to sacrifice anything to see her parents happy again.  When you are willing to part with heartbeats for your parents there is nothing you won’t do.

Until that day comes, Jasper and Sophie will be with their parent's side during every step of the way supporting them and giving them the strength to get through the unimaginable.


Posted by Foley Monster, Pocket and River Song at 5:00 PM