For R the Black Dog: Long May You Run 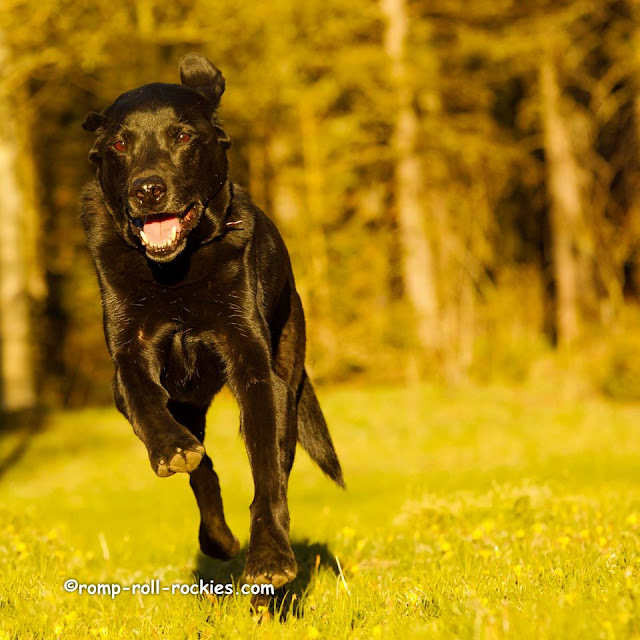 There are some rules which must not be broken, like how a new angel crosses Rainbow Bridge, climbs the steps, gets sworn in, and is introduced to life in the immortal world.  It has been that way since the first dog was mourned by man.

Which is why I was stunned when I heard thunder rolling down the mountain accompanied by a cloud of dust.  A black figure emerged from the forest at the edge of the mountains and came towards me like a rogue tornado.  When it stopped in front of me, I was doubly shocked:  Because a new angel came from mountains, not the water, and that newcomer was R the black dog, from the Romping and Rolling in the Rockies blog, who I had thought, until this moment, was indestructible.

R had survived a shoulder replacement surgery, tumors, cancer, low red blood counts, blindness, and arthritis.  Whenever life knocked him down, R fought back, never letting anything keep him down.  Despite being blind, he never slowed down and made his way in the world like a sighted dog.  Thanks to CBD oil, he pushed past through his pain caused by arthritis.  No matter how low his blood count fell, he always found the energy to romp through the mountains.  I had accepted that no matter how many dementors the Bridge sent to claim R, he would fight them off deftly.  So I was shocked to learn that Wednesday night, after a typical day, R’s heart beat its last, and he collapsed and flew to the Bridge, shocking his parents, and breaking their hearts.

Of course, this was R going to the Bridge like he lived his life on his own terms.  No one was going to tell R when his mortal song had ended.  He would pick the moment, and the manner, by which he left his parents, and his beloved brothers Shyla and Hachi, which he did, during a peaceful dinner, surrendered by those he loved.  He slipped through the immortal door quietly, and without a bit of fuss, the way he lived his life.

R lived on a mountain, in a dog’s paradise, where he could accompany his parents, as they jogged, and rode bikes.  He has encountered animals:   Lions, moose, and bears, among others, that we city slickers can only dream about.  They all respected him like they did the animals who lived in the dens and burrowed in the ground.  He existed in two worlds, both wild and tamed, and now he is going to try and live in two other worlds, both mortal and immortal.

When R arrived at the Bridge, he leaped over it and continued to fly up to the mountains, bypassing me and Blogville.  He landed in the mountains and found that the forest was identical to where he had lived on the mortal side.  All the animals he knew were there, and come morning, his mom and Shyla would come by on the bike trail, and his father would run past.  R had become one with the land, and he would always be there, around the next corner, and in the underbrush, watching his parents, his siblings, and his friends.  And, if his parents ever move from the mountain, he can live in another two worlds, always keeping one paw on the mountain.

R is a dog who only had one letter for a name.  It was all he needed.  Everything else would have been superfluous.  He was just R:  Basic, reliable, dependable, and unassuming.  Even his nickname, the Black Dog, is unremarkable, but strong.  He has passed on the strength to help his parents deal with his passing.

The mortal world has lessened for R’s passing, but the angels will be stronger, and mighty angels may be what the world needs as summer begins to turn to the uncertainty of fall.

If people remember how strong and unflappable the Black Dog is, how he never let anything keep him down, they might be able to better navigate the difficult days ahead.

Posted by Foley Monster, Pocket and River Song at 8:17 PM