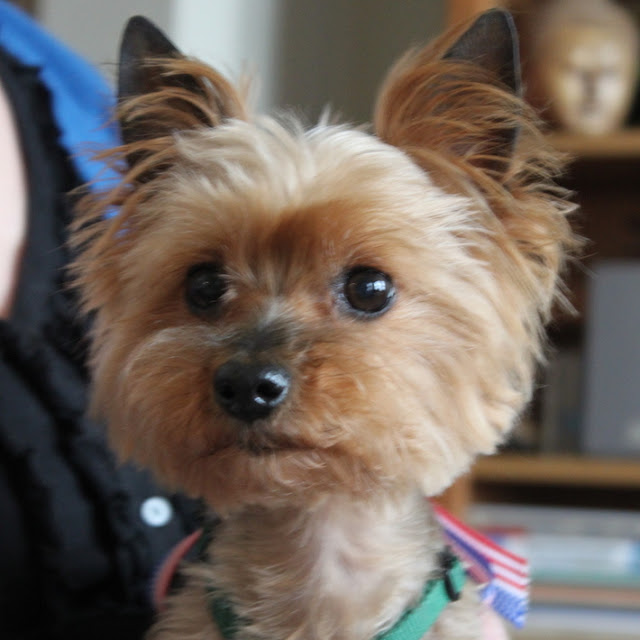 There are some days I would rather be at Rainbow Bridge, than on the mortal side, and I have recently encountered a streak of them, because the second member of the Texas Yorkie Gals has joined us at the Bridge, and the mortal side just got a lot less fun.

These two gals Chelsea and Ashton, and I have been together since we all were young.  I lived half a country away, but I got to know the duo on Doggyspace, and they were two of the first friends I invited when I formed the Tanner Brigade.  When we often get together for dream dates where we would play rodeo.  Our Yorkiness, and our love of our mom, made us fast friends.  I was the earliest to arrive at the Bridge, followed by Chelsea, and now beautiful Ashton.

When small dogs get older, they tend to go downhill quickly.  It is not strange for us to be healthy one week, and then go to the Bridge the next.  Plus, we are not complainers; we try to hide what is wrong until it becomes impossible.  This week Ashton followed the familiar route.  She became suddenly sick, packed her bags, and prepared to join Chelsea, as well as her other sisters Samantha and Ashley, at the Bridge.  His mom knew it was time and helped her make her final trip, taking on all of Ashton’s pain before she let her go.

The Texas Gal’s Mama Dee only wanted one thing for Ashton to be greeted by the sisters as mentioned above, so she wasn’t alone.  It was a wish she did not have to make.  I could not have built a wall high enough to keep these girls from reuniting.  As I waited to swear in Ashton, the Texas Gals arrived in a covered wagon, raising their usual ruckus.

I try to keep my swear-in ceremonies tasteful and dignified.  This is a very emotional moment in a soul’s life, the beginning of a new chapter, filled with wonder, curiosity, and a touch of dread.  The change can be devastating.  When Ashton approached, I had soft organ music playing, and sweet doves flying overhead.

All that was interrupted when the Texas Gals began to shoot their guns in the air and barked in their high-pitched tone.  I turned and motioned for them to quiet down, but there was no curbing their enthusiasm.  I swore an impatient Ashton in as efficiently as possible, and let her join her enthusiastic siblings.

Ashton went running to them as fast as her little legs allowed.  She jumped, and I swear, flew, an impressive feat for a new angel, on to the wagon.  Samantha held the reins in her teeth and turned the horses around.  Ashton, now in the back, motioned for me to join them.  I had to run faster than I ever had before, but I got to the carriage before it reached the uncatchable lawn speed.

We arrived at the Texas Gal’s high rise.  I could smell the chicken fried steaks being cooked on the grill.  There were piles of coleslaw, brisket, menudo, and peanut butter pie.  There is nothing like a Texas welcome party.  I was given a tiny cowboy hat.  There was a bronc in the pen that I, after a few Texas Sunrises, attempted to ride.  It lasted three seconds.  It was a personal record.  We kept partying until the cows came home and told us to cut out the noise; they needed to sleep; they had a milking scheduled for the morning.

It was an awesome night.  We hope we made enough noise that it traveled across the river, and their mom noticed it.  If she hears the sounds of a far off party or sees silent fireworks in the air, she needs to know it is her angels partying as Texans do, and they are thinking of her, and, when they run out of brisket, and the party sounds end, to go to sleep because they are about the visit her in her dreams.

Posted by Foley Monster, Pocket and River Song at 4:50 PM