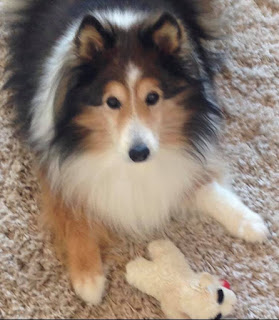 The Internet is like a mirror; it reflects society, both good and bad.  Often, I log in online, and I am very disheartened by the ignorance, hate, and prejudice I see.  Everyone has an opinion, but very few want to hear it.  That doesn’t stop people from putting their thoughts on Facebook for the world to see.  They say, in baseball, that the boos are louder than the cheers.  On the Internet, the negative is always stronger than the positive.

The Internet can be a real cesspool, but occasionally there are beautiful flowers growing in the puddles of filth, and I spotted one of them today.

There is a site that I like to frequent called Rainbow Bridge Dogs.  It is a place where parents who have just felt the crushing weight caused by the loss of a precious pet gather to grieve.  The comments are often kind, seldom mean, and makes me believe in the goodness of the human race, even if they seem determined to only show themselves at their worst looks.

A man, Tom Laughlin, posted for a woman named Bev, who he claimed is the kindest, most loving person he has met on the planet.  She recently lost her dog, Spark, who was her best friend, confidant, and child, after nearly 18 years together. Spark only cared about one thing, and that was making his mom happy. Since he has departed for the Bridge. Momma Bev has missed him with all her heart, and little has brought her joy.  Tom thought there might be one thing that would; he asked for everyone in the Rainbow Bridge Group to wish Spark a happy birthday, which I am doing, right now.  But, since I am a judge at Rainbow Bridge District Four, who had been charged with the swearing-in new arrivals, I thought I could do more.  So, I went to check on Spark.

I found him living in a big house with all the other dogs that Bev had loved before Spark.  He has been welcomed and treated warmly.  They respect Spark’s position as their mom’s heart dog.  They loved her too, and they were thrilled to see her and Spark together.  They had two goals after Spark arrived.  The first was to help him adjust to life in the immortal world.  Spark missed his mom terribly, but his new family made him feel loved and wanted.  Plus, Spark really took to the flying.  He loves to buzz around like an angel.

As all dogs do, Spark, when he crossed the Bridge, reverted to being a pup, as all the pain that brought him to the Bridge, that slowed him down as he aged, was washed away, and he felt like a pup again.  He scampers through the grass as he did when he was a young dog.  He wants to thank his mom.  He knows when he went to the Bridge that she took on all his pain on herself and is still suffering from it.  That is why he, and his siblings, are working to take it away and demolish it forever.

That is why Spark tries to visit her every day.  Unfortunately, most parents don’t recognize when they get an angel visit.  We sneak into our parents’ dreams, but by morning those memories disappear as consciousness takes hold.  Then there are the bodies we borrow.  All flying creatures can go back and forth to the Bridge.  When they are on the immortal side, we switch bodies with them, so they can enjoy what they can’t as birds, mostly steak.  We fly back to our parents’ yard.  So, if you see a butterfly, hummingbird, cardinal, blue jay, or any other bird that sees at home in your yard, know it is Spark coming down to check on you, and letting you know he is still here.

As I write this, Spark is sitting at the end of a big table, smiling broadly while watching his cake be sliced as his friends gathered around him singing happy birthday.  All his wishes didn't come true. His mom wasn't there. But someday she will be, and they will leave the Bridge for a place called Happily Ever After where no worry or sadness is allowed. Just love.

I wished to Spark a happy birthday when I left, but I didn't have to because he was already enjoying it.