A Boy and Pup Made for One Another by Foley Monster 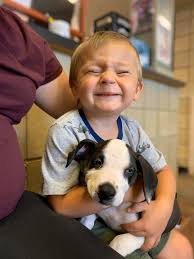 There is nothing I desire more than making a perfect union between a human and a dog, especially when they both need saving.  If one of them is a child, it is even more satisfying.  This week I was able to do that.

I got a prayer request from a sweet boy named Bentley in Michigan.  He was born with a birth defect that made him incapable of eating.  His parents had to put food in his mouth and then hold it shut, so his body did not reject the nourishment.  He has had two surgeries, and he has gotten stronger, but the defect left him with a cleft lip.

Because of Bentley’s medical issues, he had a hard time making friends.  He prayed that he could have a dog because they accept and love humans no matter what problems or disfigurements they had.  Bentley was a wise boy.

I wanted to find Bentley, a perfect dog, and I located him in a shelter in nearby Michigan.  What made this pup an excellent choice is that he, too, had a cleft lip.  Not only would Bently be getting a best friend, but he would have a companion in a similar situation, who did not let it affect him in the slightest.

I dream whispered to Bentley’s dad to go to the shelter and get the dog with the cleft lip.  The next morning I went to the rescue as a ghost to watch their first encounter.  Bentley’s dad arrived and told the workers that he was looking for a chicken to give to his son.  A chicken?  Some people don’t listen, even in their dreams.

`    I flew to the cage where the poor dog sat patiently and urged him to bark.  When he did, Bentley’s father swung about and noticed the dog with the cleft lip.  He immediately understood this was the dog for his son, which was good news for the boy, and horrendous news for the chickens, but they have their own angels.  I am sure one of them will henpeck me for interfering in a chick adoption, but I can take a few peckers.

When the boy saw the dog, it was love at first sight.  He named the pup Curtis, and their song began.  I am sure it will have many exciting verses when the two mature and heal together.  Bentley is two, and Curtis is only two months, so they have a long future together.    I wagged my little angel tail when I saw them so happy.

That night I talked to Curtis and inquired if any angels had sent him to the shelter in the hopes that he would meet Bentley.  He said it wasn’t; the shelter was just where he had been surrendered.  The bad people who left him behind had no idea the favor they were doing their expendable dog and a little boy they had never met.

Curtis should heal over time without any medical intervention.  He may have some problems eating and drinking, but nothing debilitating.  Curtis will carry through with aplomb.

Bentley is due to have several more surgeries.  His prognosis is good, and during his recovery, he now has a best friend who knows what he is going through.

Another perfect match brought to you by Judge Foley Monster with a big assist to the fates.

I hope Bentley and Curtis romp together for a long time.