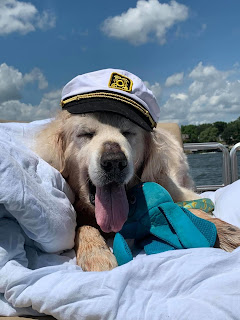 I never needed a bucket list.  My entire bucket was one more day with you. But, other dogs who like to be outside more, and lead an active lifestyle, want to do the things they loved during their life one more time before crossing over.  I love the parents who work hard to see that their dogs get to do those things.  The story I am about to tell you is an extraordinary one.

Theo lived as an outside dog for 12 years.  He didn’t get a lot of attention, but he still loved his family and was loyal to them.  When he got sick, and his parents left him tied to a pole at a Wal-Mart, he thought they were just shopping.  It took him a while to come to the sad realization that he had been cruelly abandoned.

When a rescue found the dog they would name Theo, they took him to the vet, and it was discovered that he was terminally ill, with tumors in his groin and stomach.  It would have been easy to send him to the Bridge right away, but one of their workers, Jenny Leech, saw a dog who still had a lot of love to give, and who was filled with happiness and a zest for life.   She convinced the other workers to let her take Theo home to live out the rest of his life happily.

He was having been given a second chance at a family, Theo embraced everyone in it with as much love as he could muster.  His parents knew that Theo was in terrible pain, but he hid it from his parents.  They wanted to do something special for this resilient dog, and that is when they decided on a bucket list.

Before they started on their journey, Theo’s parents promised him that if he ever showed signs of not wanting to go on, if he didn’t eat, or couldn’t walk, then they would take him to the vet and send him on his final journey.  But, until then, it was party time.

For the first time in his life, Theo got to go to the beach and chase the seagulls, run after the waves, feel the salty wind on his face, and gaze out to where the sky met the ocean and the Bridge crossed over.  He promised he would be there soon, but not today.  He got to go with his parents to drive-in-movie night.   He didn’t know what picture it was; he was just happy to sit on his parent’s lap and get popcorn.  He has gone out to eat with his family for steak and delicious hamburgers.  He was appointed an honorary K9 office by the local police. He even went on a blind date with another dog and was a perfect gentleman.

Every day Theo and his parents check on him and then plan which item on the list they will cross off the list that day. Thanks to the suggestions from people all over the world, it grows longer. The entire community has come together to bend some rules so Theo can enjoy every minute of his last days.  He quickly went from being an unlucky dog with a terminal illness tied to a pole to being the luckiest dog in the world.

Theo was a victim of the worst of men’s nature, but now he is encountering the best.  These good people are the ones who spark our unlimited devotion, even if that means that we give it to the bad, dog abandoning pole tying ones too.

Posted by Foley Monster, Pocket and River Song at 8:11 PM