From Shelter To Home: Sofa Takes the Long Way Around by Foley Monster 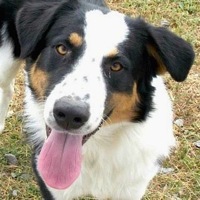 When we angels help a dog get adopted, we think our work is done, but sometimes adoption is just the beginning of the problems, not the end.

An Australian Sheperd named Sofa had been praying to us to find the perfect person to adopt her out of the shelter.  It took us a few weeks to find a gentleman who we knew she would love, and he would reciprocate.  Using dream whispers, we led the man to the shelter.  When he saw the dog, he knew she was his soul mate. He filled out the papers and took Sofa from the shelter  We chalked it up as another job well done.

The first thing her dad wanted to do was to give Sofa a walk.  He knew it had to be driving the Australian shepherd crazy not to sniff the wondrous scents on the ground and in the air.  That was his first gift to her.

There are many predators that prey on dogs, and one of the worst is the uneducated, irresponsible owner.  Sofa and her new dad came in contact with one of them, who had let his large dog run unleashed.  It attacked Sofa.  Her dad needed two hands to pull the big dog off of her, and he dropped the leash.  When they have pulled apart, Sofa bolted.  Her father called her name, but since Sofa had only been called it for a few hours, she did not recognize it.

Also, Sofa had never been to her new home.  Even if she could have picked up the scent, she would not recognize it.  She was truly lost.  When her prayers came in, they began as an apology.  She knew we had just found her a parent, and she lost it in the first hour together.  Sofa was sure she would end up in the shelter again and swore to avoid people and stay free.  She thought that even if her dad found her, he would never trust her.

The contrary was true.  Sofa’s dad’s heart was filled with joy the first time he had seen her.  She had instantly become his daughter.  Now she was gone.

Sofa ran and did not stop.  There were flyers put up around town, and Sofa’s face was posted on the Internet, and that lead to a sighting eight days later.  By the time her dad arrived, Sofa was gone and would keep alluding her searchers for weeks.

There were more sightings. It became clear that Sofa was only going out at night.  Frustrated, her dad attempted a high tech solution.  He put a trail camera around the wooded area where Sofa had last been sighted.

Sofa proved to be camera shy.  She did not show up on the trail cams. Weeks passed.  Suddenly more sightings came pouring in.  She had expanded her hunting area and was seen in an industrial zone.  A pattern was emerging, and her dad thought he could anticipate her movements.  Then he had a sickening realization.

Sofa hardly knew him.  They only had a half-hour together.  When Sofa looked at him, she would not see her dad, but a stranger.  It seemed hopeless.

We angels had another problem.  Sofa was very skitterish and was worried we were sending her back to the shelter, so she would not listen to us, thinking that we were answering her prayers with fake news.

If we were going to reunite them, we had to be wise.  We dream whispered to him to build a humane trap and where to put it.  He did so, even though it cost him more than a thousand dollars.   He was the one person who lived by the words:  “Money is no object.”

We used a bit of fake news to get Sofa into the trap.  We told her there was delicious food in it.  When the trap closed, Sofa thought we had betrayed her.  But then she saw the man who she recognized, sniffed his comforting smell, and realized we were all trying to help her.  When the trap was open, she ran into her dad’s arms.

It took more than 80 days to find Sofa.  Most parents would have given up and got another dog.  But Sofa and her dad were such a perfect match he couldn’t give up.

Their reunion has not been easy.  Sofa still is a night owl and hates walking on a leash, but that will come in time.  If a man is willing to search for 80 days for he can surrender a few more training her.

Because they are a perfect match.