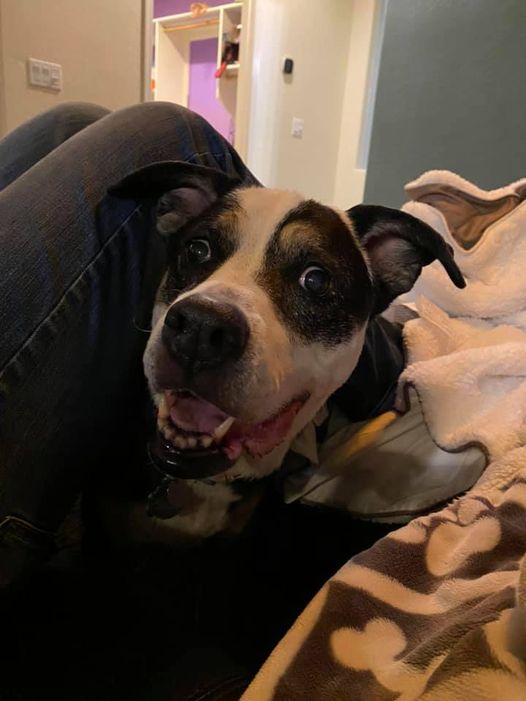 When I last left you, my sisters had ruined Christmas when, after forcing Santa to undergo a test for the dreaded 19 and finding that he had the disease, River chased off the reindeer stranding St Nick at our house on the Knoll.

My sisters made the right decision and contacted me.  When they told me about their difficulty, it made me understand why something had happened earlier in the week.

Three days before Christmas, one of our Original Doggyspace alums, the beautiful, soulful, kind, funny, supportive pitbull named Shiloh, crossed the Bridge after wrestling with lymphoma for months.  She even had the dreaded disease defeated earlier this year until it rallied back in mid-December.  I didn’t know why she was chosen to come to the Bridge during Christmas week, but as my sister told me of their dire predicament, it became more apparent.

There was a massive celebration of love, sorrow, happiness, and reconciliation at the Bridge when Shiloh reunited with Hattie, Benji, Felix, and many other old friends.  Tears shed by humans on the mortal side rained down on us during the swearing-in ceremony.  When it was over, Shiloh ran to his grandmom, who preceded her to the Bridge, and whom she would live with at a dog-friendly mansion.

That is where I found her on Christmas Eve, hosting a party with our friends.  I took her aside and told her what happened.  “Boy, your little sisters are Christers,” she laughed.  Then I told her my plan, and she excitedly agreed.  She recruited her friends to help her.

We went to my parents’ little house, where my sister sat with a sad Santa on the steps.  I have been friends with the merry elf since I spearheaded an effort to bring shelter dogs Christmas Gifts.  Santa was happy to see me and said he hoped I had an answer to his predicament.

I told Santa that I could not let him go into people’s houses when he had COVID.  Santa sadly sighed, realizing that there would be no Christmas this year.  I told him not to be down.  I introduced him to his COVID replacement:  Shiloh Claus.

Santa had never let anyone drive his sleigh, but when he saw Shiloh, his face lit up.  If there was an angel he could trust with his sacred duties, it was kind and faithful Shiloh.  Santa readily agreed to let her take his sleigh and said he wanted to give her a big kiss but couldn’t because of the dreaded 19.

“We still don’t have anyone to pull the sled,” Santa said, his hopes sinking.

“Don’t worry,” he assured him.  “We have a team even better than your reindeer.”  That is when eight angel pups appeared and fastened themselves to the sleigh.  Santa laughed.  “You dogs have thought of everything.”

Shiloh climbed on the sled, sat on the seat, wrapped the reins around her paw, and commanded:  “On Hattie, on Tommy, on Baron and Benji, on Smartie, on Felix, on Beaux Jangles and Summer.  The angel dogs dug their paws in the lawn and began to run.  When they flapped their wings, the sleigh was silhouetted against the moon; they disappeared into the stars.

Shiloh did such an exceptional job; it was impossible to tell she was not the original Santa.  Dogs who waited under the tree to see St. Nick were delighted to discover his duties undertaken by a pittie.  Shiloh made sure all pups had special treats, and she shared the milk, cookies, and other snacks put out for the big man with her reindeer.  By Christmas morning, her work was done.  She returned to my house, picked up Santa and brought him home to be cared for by Mrs. Claus, and to take part in the post-Christmas feast for Santa, the elves, his helpers, and reindeer.  Santa was relieved to find they had flown back home, and he did not blame them for running off.  Everyone agreed that it was River’s fault.

I don’t pretend to know why angels have to come to the Bridge when they do.  There is seldom any rhyme or reason why.  But, with Shiloh, I understood.  Sometimes the fates can see into the future.  They must have known Santa would be disabled and need a substitute, and the only soul who could accomplish this was Shiloh.  She was brought to the Bridge to save Christmas.  Sadly, she can’t go back to the mortal side.  Now she is her mom’s all-encompassing angel. Shiloh’s next miracle will be rebuilding her mom’s heart.  Stepping in for Santa was easier.

I hear rumors that Santa may be splitting duties next year with Shiloh Claus.  If you look to the sky on Christmas Eve and see a bright light moving along the skyline and then hear barking make sure you stay awake to greet Shiloh Claus.  Also, bacon is preferred over cookies for a snack.