River, Pocket and the Santa with the Poor Hands 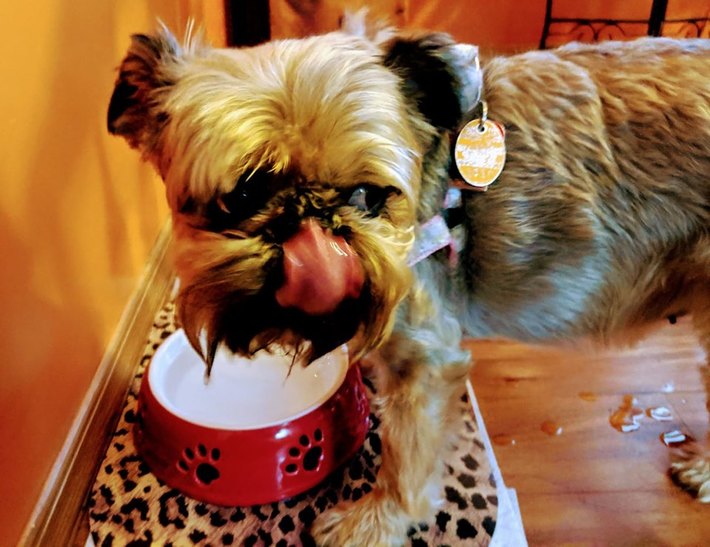 On a Saturday last year, when their parents were shopping, Pocket and River Song downloaded themselves to the local PetSmart.  Word had gotten back to them that Santa would be there.  They wanted to get a photo with the big man and give him their Christmas lists.

They landed in the office, which was, thankfully, for them, empty.  The tiny, dastardly duo found themselves locked inside and had to bark without abandon to draw the attention of the confused manager, who opened the door and freed them.

The manager gave chase, determined to find who belonged to these two troublesome dogs, but Pocket and River are Hide-n-Go Seek masters and scurried into the food section, crawled on to the bottom shelf, and wedged themselves behind bags.  While they were waiting for the search to cease, Pocket heard crunching.  River Song had ripped open a bag and was helping herself.

When the manager gave up the hunt and returned to her duties, Pocket came out of hiding, then had to wait for River to fill her always empty tummy.  River confidently came out and told Pocket they had to wait in line.  When they came to the picture-taking area, it became apparent to them they needed humans to say they were pack members.  There was a couple with three Shih Tzus.  River and Pocket stayed close to them, and the person taking the photos assumed the two little dogs were part of their pack.

The line moved slowly.  Pocket was anxiously looking around at the other dogs and people doing a threat assessment of her surroundings.  River, always impatient, fussed and growled, willing the line to keep moving.

Eventually, they were the next in line.  River said they should let the Shih Tzus go first, and then when the parents were waiting for the photos, get their pictures taken, and leave the lists.  For a River idea, it was sound.

The people in front of them had brought a baby.  This incensed River.  They were at a place where dogs were getting their pictures taken.  Kids could get their Santa photos done at places where dogs weren’t allowed, like the mall.  Pocket tried to get River to stop growling, which aggravated her sister and made her louder, which got Santa’s attention.  At that moment, the baby moved, Santa didn’t, and the kid fell face-first onto the floor.

First, there was an audible gasp, then a yell, as the father ran to pick up his fallen son.  The boy seemed fine, much better than his dad, who began to yell in disbelief that Santa dropped his baby.  The mom took her child, who had started to cry, not from the fall, but the fallout.  Recognizing his faux-pas, faux-Santa pointed at River and claimed that her growling had distracted him.

All eyes turned to River.  She saw their accusing faces and then used a gift she had been given that humans can never obtain:  Smelling.  She sniffed.  And that is when she learned the truth.

“He’s not Santa!” River announced. She leaped up and pulled the disguise off the man who had dropped the baby.  “He’s the fish guy!  He reeks of goldfish!  No wonder he dropped your baby.  He’s all wet and scaly.”

Usually, this would be alarming information, except all the humans heard from River was “yap, yap, yap, yap.”  The father, having identified Santa, from River’s unmasking, as the guy who sold him some defective koi, punched the Saint Nick want-to-be right in the old Blitzen.  A real bruhaha began, featuring two strangely vicious Shih Tzus.  During the commotion, River and Pocket retreated to the manager’s office. They uploaded themselves back home, having failed to get their picture taken or leaving their list, but did raise the bar for Santa’s everywhere.  The entry questions for Santa school are much more complicated, and every applicant must pass baby catching classes before getting their Santa Certificate.

And that is the story of how River and Pocket snuck out of the house to get their picture taken, exposed a fake Santa, and tightened the Santa school standards.  A productive day for sure.