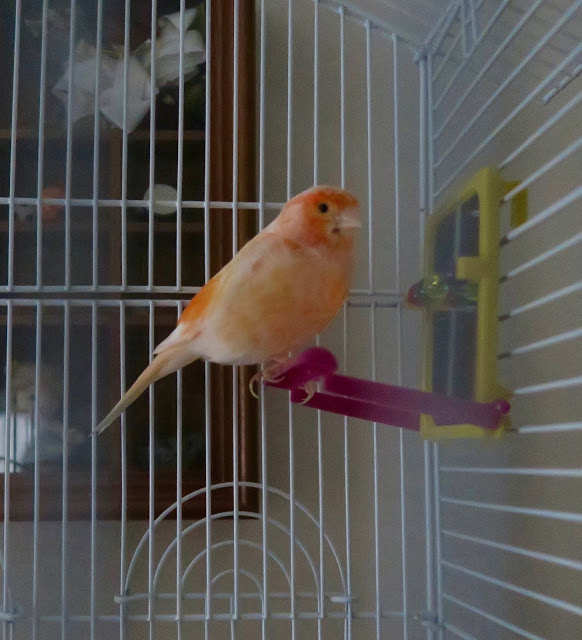 Today, I got a prayer request from my good friend Lightning of The Chronicles of Woos Blog.  My buddies there had a tumultuous year, COVID, lockdown, and Presidential politics aside.  Against all odds, having survived separation, several surgeries, and illnesses, the Roos dogs were together for Christmas. A week before the grandest holiday of all, I got a message from my friend Lightning telling me something was amiss.  I went to him immediately. I had hoped my friends would get a quiet Christmas. Lightning’s summons made me realize that wish, like so many in 2020, would be denied.

When I accessed Lightning’s dreams, he told me why the request:  His beloved bird Piper had gone to the Bridge. “You have taught us how winged creatures can fly back and forth from the Bridge.” Lightning said. “I was hoping Piper could come home for Christmas to surprise my parents.”

I was given the unenviable task of informing Lightning that while Piper was a bird, he was not eligible to come back and visit them. Lightning looked disappointed and softly asked why.

Every bird looks for love throughout its life. Even after their passing,  birds fly back, hoping to find a person who will treasure and care for them, not leave them out in the freezing temperatures or prey upon by hunting animals. Most birds never know love. But for a select few are fortunate to receive it from kind people who enjoy their sparking songs and inquisitive personalities.

Piper was one of those birds. He delighted his family with his beautiful songs. When anyone came into his room, he played with his toys for them. He was a bit of an attention hog.  He hadn't been feeling well as of late. The doctors could not pinpoint what was wrong.  He tried to borrow some heartbeats to make it to Christmas, but sadly, he was denied and a little over a week before the big day, he flew to the Bridge.

Usually, birds go to Bird City after they fly over Rainbow Bridge, but Piper asked if he could live with his Angel Dog family.  His request was immediately approved.

Then he inquired about flying back to visit his mom using his own body. This request was immediately rejected. Piper was told once a bird was loved and then passed to the Bridge; he could never use that body to visit his parents because it would reveal too much about the next world.

Piper was saddened he could not sing one more time for his parents on Christmas morning. I'm an angel who strives to make dreams come true. I took Piper by the wing to the Rainbow Bridge bird store. I announced that he wanted to switch bodies with another bird to visit his parents on Christmas.  No one stepped up to volunteer.  They liked walking around in cat or dog bodies, and even the occasional lizard.  Another bird was boring.

On Christmas, we should make sacrifices for our friends. So I offered a crow the greatest Christmas dinner he had ever eaten. He could invite other birds too. And they would be waited on by Angel Ciara, Dakota, Thunder, and Phantom, Piper’s family.

It took some wing twisting, but the crow agreed to exchange his body for Piper’s, and in return, we would serve him Christmas dinner with all the fixings.  Piper was upset that he would have to sing to his parents using an out of tune crow voice, but we convinced him it was better than being unable to sing for them at all.

So to the Woo parents: On Christmas morning, listen for the sound of a bird song and know it is Piper wishing you a Merry Christmas.

Posted by Foley Monster, Pocket and River Song at 5:57 PM