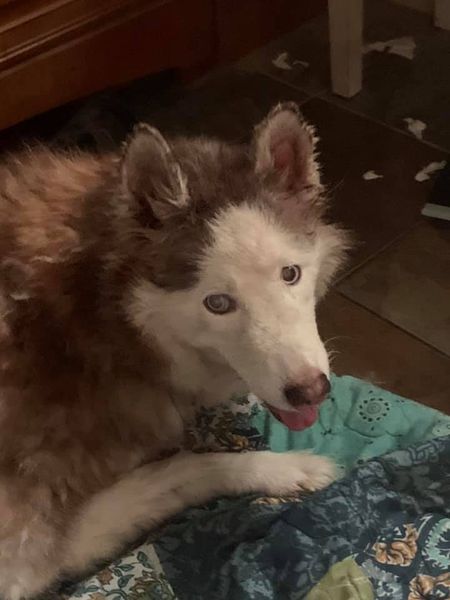 Sometimes, dogs are more used to their parents as an angle than with them on the mortal side.  It is a hard day when one gets their assignment to go to the Bridge because no dog wants to leave their parents, but if they are needed on the other side, they go without complaint.  Such is the life of one who has taken a sacred oath.

Two of my favorite parents, Myssy and Don Sullivan, have been fated to suffer from more medical problems than a wet monkey on a rock.  Whenever they seem to be getting ahead, they get yanked back.  Loyal angels at the Bridge who used to live with them have come to their air because they love them and are extremely committed to their healing, but lately, the angels have become overwhelmed. They fight the demons that relentlessly pursue their parents.  But recently, the demons have been getting the upper hand.

The angels formed a committee to discuss how best to manage the duo’s illnesses, and they decided that their brethren were getting overwhelmed.  They needed a new pup from the Sullivan brood, one who is steeped in kindness and wisdom.  There was only one choice:  The brilliant, loyal black/white male husky with deep blue eyes named Tasha.

As could have been predicted, Tasha balked at leaving his happy Alabama home.  I joined the angels as they conveyed to him the reasons he had to shrug off his mortal coil and become an angel.  He battered back every suggestion like a tennis player hoping to outlast his opponent by protecting the baseline.  But, there was one he couldn’t return.  It was that he was needed at the Bridge, and if he stubbornly kept refusing to go, it could be his mom or dad who would be called home; when the angels put it like that, Tasha had no choice.  He surrendered his remaining heartbeats, submerged himself in the river, came out on the Bridge said, crossed, and because of all the excellent work he had done as a mortal, became a mighty angel.

The angels who make these decisions are rather cold and rarely recognize emotion.  Even though they were right:  Having Tasha creating prayers and persuading the powers that be to ease his parents’ pain and sickness, they did not take into account the incredible sadness that Myssy and Don would suffer when Tasha went to the Bridge.  Maybe they are right; when it comes to critical issues, like a person’s health, emotion should not be part of the equation, but I bet Tasha’s parents sure wish it was. Any parent would take on illness for one day more with their baby.

Such is the duality of mortal and immortal life.  Tasha is working hard, so his parents don’t see him for a long time, and they wish he were still with them, for an equal length.  I hope they take comfort in the fact that Tasha is always waiting for his parents to fall asleep, either a quick nap or a long night’s sleep, to go into their dreams and try to provide emotional comfort to them.  It is an arduous task, but Tasha is always up for a challenge.

Sometimes, to cure an illness, the medicine is worse than the disease.  I don’t know if, in the long run, that is true in Tasha’s case, but I know his parents would give up 1,000 days for one more with him, and he gave up 1,000 days to try to ease their physical pain.

It is a real sign of love on both sides, and they need to remember that someday, they will all be angels working for their loved ones.

Posted by Foley Monster, Pocket and River Song at 8:42 PM