Fulmine and his Dad on A Forever Walk 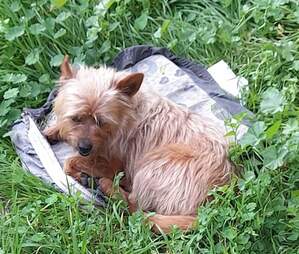 In the Italian countryside, where life is bucolic, a dog named Fulime, and his father, Leonardo, became part of the residents’ lives, like the moon and the sun.  The duo lived a simple life, enjoying one another’s company.  Besides a touch of food, it was all they needed.

During their walks, they would often stop, sit on benches, rest, and cuddle.  People who saw the pup and his dad could not help but smile.

In the end, a dog and their person’s relationship will pass in the blink of an eye, and then one of them departs for the Bridge.

Leonardo was summoned first via an illness that put him in the hospital and then took his mortal life. Fulmine was taken in by Leonardo’s children, who immediately noticed that the little dog grew more depressed each minute.

Whenever a car approached the house, Fulmine ran to the door, hoping it was his dad, then returned to his bed, sad but still with hope. One night Fulmine woke up crying.  A few minutes later, the family received the phone call that Leonardo went to the Bridge.  Even after that tragic event and dream visits from his dad, Flumine kept looking for him on the mortal side.

After the service, Leonardo’s daughter Sechi, now Fulmine’s parent, took him to the grave.  The little dog sniffed for minutes and then laid down on it.  When Sechi wanted to go home, she called for Fulmine, but the dog did not move.  He was content with staying with his dad.  Sechi had to carry him to the car.

The next day Sechi and her son returned to the grave and were shocked to see that Fulmine had slipped out of the house and beaten them there.

Fulmine had walked two miles, from the countryside to the city, all on his own.  He knew that six feet under the earth lay his dad, and Fulmine was content to wait for his dad to emerge.

It was not a one-time occurrence.  Every day Fulmine makes the two-mile trek to visit her dad.  Just as she and her dad became part of the community during their daily excursions, so did Fulmine’s solo journey.  The neighbors, who watched over Leonardo when he walked with his dog, now keep an eye on Fulmine to make sure she is safe during her pilgrimage.

We angels know that Fulmine does not make the journey unaccompanied.  We can see Leonardo walking with her as a transparent ghost, once again enjoying the best part of his mortal life.  When Fulmine goes to sleep, she is taken to the Bridge for another long walk with her dad; they both wait for the day they are reunited and can spend all day walking the trails around Rainbow Bridge.

On their walks, Leonardo reinforces a promise he swore Fulmine to before his parting:  The little dog would help his family mourn.  Seeing her devotion and love for their dad is doing that.