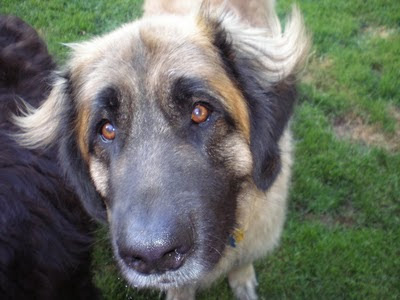 A short time ago we made MacDougal our pup of the week when the brave little Cairn created a brand new line of defense for pups everywhere by shooting Vick out of her butt like a solider firing a Gatling Gun.

Now our wonderful friend Chappy had improved on this idea. Our ears have many purposes. They help us know when Daddy is two miles away from coming home, when the pizza man is getting closer to our house, and to wiggle and turn so we look even more adorable.

But Chappy had taken those cute ears and turned them into an offensive weapon. Stroke Chappy the wrong way and he could turn his head and leave a mysterious red gloop on your lap, and who wants that?

And not only that but he made change too. 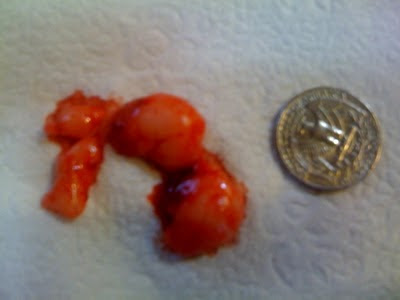 As far as I can tell Chappy's plan is to squirt out the quarter, wait for some schmuck to come along and pick it up, and then cover them in red goop.

Now we have a bit of a problem, we still don't know what the red gunk was. And we're concerned that whatever Chappy loaded into his ears to keep anyone harmful away from his family,could cause hiim to have an operation and wear the cone of shame.

We are all sending prayers Chappy's way so that thing doesn't happen.

One day sometime over the last few years Daddy and I were watched a movie called Alien when something comes out of this unsuspecting guys body then goes running around the room. We also hope this doesn't happen to Chappy. We don't like Aliens. They shoot them in Arizona.

So for inventing this new line of defense, and hopefully not bringing an alien to our land, or have it be something dangerous we are awarding Chappy the Pup of the Week.

Now, if that thing is an alien you need to tell it you are the pup of the week and it better leave you alone. Then run like hell.

And if it's something you need to see the dogtor about make sure you bring blog so he will know he is fixing the most important dog in the land.