Our visit with Ms Laura and Pokey Lunn

This morning Pocket and I thought was going to be just another boring Saturday: Bath, humans eating donuts, us not eating donuts, mysterious poo dropping, bedroom time while Mommy and Daddy go shopping and "dining" then sitting with them when they pass out for over "dining."

But today, no, no, no, not today. After donuts and after Mommy put her hair and face on they got our leash, dressed Pocket in her new skirt (OK, yes, Pocket has a skirt. Mommy and Daddy are having her wear it when she has to wear her diaper so she doesn't look as funny. Looks the same to me) and put us on our leash and plopped us in the back of the car.

I didn't know where we were going. To one of our sisters? Our brother? Aunt Bev? The groomers? But once we were in the car for more than a half hour I knew we were going somewhere special. Pocket wasn't as clever, stopping to look out the window, bark and whine, whenever we slowed down to 30 MPH.

That freaky little box was barking out directions and Daddy was doing his best to keep up with her even in he got yelled at a few times. Then we came to a pretty ranch, sitting up on a hill, and the box said we had arrived

There was a woman standing in the door, and a doggy, but there were steps, and Mommy and Daddy insisted we pee before we go inside. I peed but Pocket said she didn't have to. So we went inside.

And guess who it was? Well if you don't know then you're the type of dog who reads a blog without reading the title so go read it. I'll wait....... OK, see, yes, it was Pokey and Ms. Laura.

Pokey was being held on a leash, and we were on our leash, and there were three dogs barking up a storm. Then Pocket peed on Ms. Laura's floor. So unprofessional.

Ms. Laura still has a large cast on her arm from the incident which must not be spoken. She was in lots of pain. But she was such a wonderful hostess. She gave me some scratches. She picked us both up but we got nervous about hurting her so we scratched at her until she put us down. Somehow that logic is flawed but I don't know how. 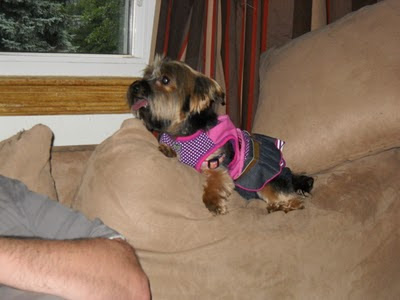 Yeah, we talked about a lot. Our favorite walks, how much we love our Mommies, what we like for treats, why Pocket was wearing a dress (at one point, for about five minutes, Pokey just looked at Pocket with that head tilt thing going on and the look in the eyes of WTF?) 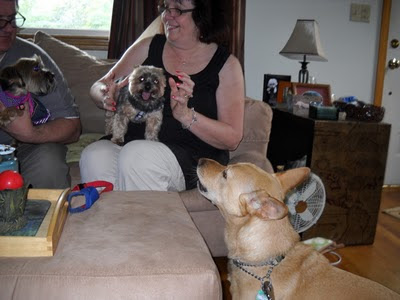 Pokey promised to back me up when it's time to pay the weasels which is so much better then a Yorkie in a dress to cover her diaper. We talked about how we care for our Mommies when they are sick Then Dr Pocket got over her nervousness, remembered her oath, and took off Ms. Laura's bandage so she could have some relief. Dr. Pocket is an excellent Doctor. She's only a fair dog but she's an excellent doctor.

Ms. Laura's house is so wonderful it protected us from a terrible thunderstorm that left some of the neighborhoods near her under water. If there is ever a disaster that is where you want to go.

Way too quickly it was time for us to go home. We said our goodbyes and we promised to get together again when everyone is much healthier.

So we want to thank Ms. Laura and Pokey for giving us a wonderful afternoon. They could not have been better hosts or made us feel more at home. We would like you all to say a little prayer for her tonight so she recovers, gets back to golfing and taking the Pokster for long walks.

And thank you to Ms Laura for the pictures that we borrowed from her Facebook . She takes better one handed pictures then Mommy does with two hands.

And finally, if you find yourself in New England, look her up. There is not better place on the East Coast for a pup or parent to spend a day.
Posted by Foley Monster, Pocket and River Song at 6:32 PM