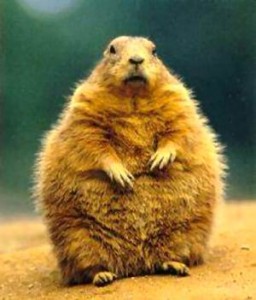 *The Pawnight show theme song begins and there is a tracking shot of the dogs in the audience barking and wagging their tails.*

Pocket:  Welcome to the Pawnight show with your host Foley Monster.  Tonight's guest is the great prognosticator of spring Puxatony Phil.  With Hobo Hudson and his all mutt orchestra and Miss Hattie Mae on vocals.  I'm Pocket Dog.  And now, here's Foley.

*Audience barks and howls.  Curtain opens and Foley steps out and bows.*

Foley:  Thank you.  Thank you very much.  Wow.  Some winter huh?  I had to go out to the dog park to do my business if you know what I mean?  *Audience howls*  I was standing in line with an Irish Setter.  She asked if I was waiting for someone and I said yes a pack of Great Danes to melt the snow.  *Audience howls again*  All right.  Tonight we have a very important guest.  One of the most famous animals in the world.  The prognosticator's prognosticator Puxatony Phil.

*Audience barks and howls as Phil, a large, hairy groundhog comes out.  Foley and Phil stand on their hind legs and hug.  Foley then leads him over to a chair and Foley's desk with her chair behind it.  Phil sits.  Foley scratches the chair for a minute, spins around twice and sits down.*

Foley:  So, Phil, big day this week.  You predicted that we would have an early spring in the midst of one of the worst winters ever.  What made you predict that?

Phil:  Oh bugger that.  I didn't predict anything.  Those blokes came to pull me out and I said back off.  If they wanted to know if a shadow could be seen look at the ground and see if they cast a shadow.  Don't pull me out of bed.  So when I refused to go they cut up a mink coat, glued part of it to a chipmunk and pretended it was me.  That chipmunk predicted spring coming early.  Stupid chipmunk.  Can't stand those things.

Foley:  So you don't think we are going to have an early spring?

Phil:  What kind of wanker do you think I am?  Who would possibly think we would have an early spring when it snowed in 48 states 21 of 31 days in January.  Except a chipmunk in a fur coat.

Foley:  Are you saying the entire groundhog ceremony this year was a fraud?

Phil:  Foley, the last time I actually came out of my hole on Groundhogs Day was in 2005.  Last year I was in Rio with the Hilton Sisters.  The year before that I was in Vegas with Charlie Sheen the entire month of February.  The whole thing is nothing but a blur.

Foley:  I have to tell you Phil I feel kind of used.  For years all animals have idolized you and I'm beginning to think you're a bit of a fraud.

Phil:  Tell me Foley:  How many animals do you know who are pulled out of their warm environment in the dead of winter on a freezing cold morning, paraded in front of hundreds of disillusioned humans who have nothing better to do with their sad little lives then to bundle up, drink hot chocolate and hope to get a glimpse of an uncooperative rodent?    And they are waiting for me to tell them if the sun is out, which they knew anyway, because if the sun was shining they wouldn't need the hot chocolate and layers of clothes.  The entire event is terribly depressing.  Have you ever seen two humans fighting over a peanut vendor in the snow?  I will say, humans are adorable when they chew their peanuts.  *He makes a scrunched up face and pretends to chew as the audience laughs.*

Foley:  You seem rather bitter Phil.

Phil:  You know what I realized in 2005?  I looked out at the crowd, humans selling food, t-shirts, television camera with reporters paid through cooperate sponsorship, everyone making money but me.  When I demanded my share they put me in the hole to teach me a lesson.  Stupid humans.  I just crawled out the other side.  Tried to cut my own deal.  Thought we could have a Puxatony Phil day the weekend before the Super Bowl.  But I found out I was blackballed.

Pocket:  Did you get them when you dug out of the hole?

Phil:  I couldn't get any work in the business.  My downward spiral began.  I had to feed myself out of dumpsters.  I had to dig for food in gardens  then I got a break.  Hosting the CBS show "So you think you can tell if there are six more weeks of winter?"  But after two weeks it was canceled and I was back on the street.  I began to appear in casinos getting together with my random rodents and seeing how many of us could climb into a spinning pink Cadillac under a giant floating Elvis head.  Some nights I had to work the stripper pole when the Beaver called in chaffed.

Foley:  It sounds to me like you have had a hard life after leaving the hole.

Phil:  I straightened out after being in Betty Ford for three months.  When I left I stopped, turned around, and told Lindsay Lohan she had six more weeks of rehab.

Foley:  Is that when you returned to your hole?

Foley:  Pocket don't talk to the the guests.

Foley:  Pocket do you want to go in your crate?

*Audience goes "Oooooohhhh" as Pocket puts her tail between her legs.*

Phil:  They tell me if I don't cooperate with them they'll evict me from my hole.  That's when I sued them and won the right to stay in my hole.  I represented myself.  Surprised them by citing as precedent Tamarka the Rat v New York Transit Authority.

Foley:  So while you weren't doing the prognosticating, who was?

Phil:  Well the first couple of years they tried other groundhogs but that didn't work.  They had no spark.  You can't replace a Simon Cowell with some drugged out hippie from an 80's heavy metal band.  People won't buy it.  They tried muppets, and the past couple of years it's been Craig Ferguson and a puppet, but his wife went into labor on February 1 this year so they tried to get me to come out again.  Truth is, if the weather had been better I would have done it, just for nostalgia.

Foley:  Will we ever see you pop out of the hole again?

Phil:  Never says never Foley.  That's my motto.  But it would have to be during a lot warmer winter than this one.

Foley:  Say how was it working with Bill Murray?

Phil:  Oh, Bill's a pro.  When we were doing Lost in Translation together we had such a good time.  At the end when he came over and whispered something in my ear, totally not scripted.

Pocket:  I thought that was with Scarlett Johansson?

Phil:  Sophia Coppola green screened her in during editing when the studio felt the coupling of an older man and a younger groundhog was too controversial.

Foley:  Actually I was wondering about the movie named after you:  Groundhog Day.

Phil:  You mean Puxatony Phil Day?  Well working with Bill, again, just a genius.  And we did our own stunts.  When we drove off the cliff, that was us, driving off the cliff.  I jumped out before we hit the ground.  Bill was burned to a crisp.  That's why it all takes place on the same day over and over.   They had so much footage from that one day they changed the whole concept of the movie.  It was to be more Thelma and Louise with a man and a groundhog.  And they denied me a producer's credit on that too.  The whole thing wouldn't have happened if I hadn't put the star in the burn unit for 32 weeks.  And do I get credit?  No.  Another in the long string of my humiliations.

Pocket:  Wow, you're one bitter rodent.

Phil:  You want the job?  Live in a hole, come out once a year, get bright lights in your eyes, get held up so every little kid in Western Pennsylvania can see your genitalia?

Pocket:  Would I?  Puxatony Pocket?  I'd be famous.

Phil:  How old are you, three?  You could come back to my hole, put on some jazz, have a glass of brackish water and we could discuss it.

Foley:  Hold on there Pocket, I think Mommy expects you home tonight.  I promised her.  And we are out of time.  I would like thank our guest Puxatony Phil and we hope to see you some Groundhog Day soon.

Phil:  I wouldn't bet my last kibble on that Lolipop, now I asked for a carton of Lucky Strikes and a bottle of Manischewitz, if it's not in my dressing room by the time I get back you will be hearing from my attorney.

Foley:  I would like to thank Pocket Dog, Hobo, Hattie and the orchestra.  Everybody have a great night.  Now stay turned for Late Night with Jimmy Ferret.  Good night everyone.


Posted by Foley Monster, Pocket and River Song at 5:09 PM