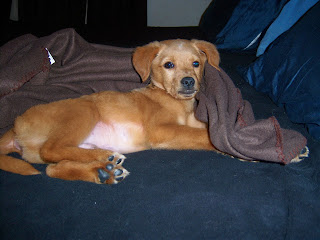 Pocket and I conduct our Pup of the Week meetings over a nice brunch of bacon and kibble.  We both read the blogs, and then discuss our nominations.  Sometimes we completely agree.  Other times we argue.
This was one of the nomination meetings where we argued.

I had a nomination.  Pocket raised some good points.  At the beginning of the week this pup wasn't even a member of the Brigade.  His names doesn't appear on our membership rolls.  This pup would hold the record for fastest pup of the week win after joining the Brigade

But there were two important reasons for giving this pup this honor.  The first is that the pup's family took in a sweet special needs dog for adoption and they deserve recognition.  The second is that he showed the will to live and find a good home.  Which is why Wills is our March 27, 2011 pup of the week

So many of us had a hard life before we found our forever home.  I was on a big farm where I got to run around free with my family.  OK, I had it super sweet, but I am lucky, and an exception.  Pups found by the side of the road, facing the business end of a gun, in a dumpster, abandoned, dumped, wasted and not wanted are the norm.  But for most of us those days are long passed, and, thankfully, barely remembered.  For Wills it is like it happened yesterday, because it did.

He is a Golden Retriever who did not receive proper nutrition from the day he was born.  Because of his mistreatment he did not develop correctly and lost his sight.  Also he was only 8 pounds.  He didn't have much time left.  But then the wonderful, beautiful, kind-hearted Ms. Barbara brought him into the most wonderful home a dog could have.

The vet named him Wills because he showed such a great will to live, and Ms. Barbara knew it was the right name.  As they were leaving the vet told Ms. Barbara that she was surprised he was alive.  Well, in his wonderful new family, he showed he will not only survive, but thrive.

I will let Angel Sophie Bub tell the story of when he got home because I cannot tell it any better than Sophie does in her beautiful blog:  "Now, little Wills made mommy cry tonite. She got him a harness like Pocket and Foleys.  She has been helping him keep his feet under him with this harness and a leash. Mommy took him outside tonite to potty and he started to run in a big circle around mom.  He kept falling and pretty soon (with mom holding the leash tighter) Wills was running fast as his little legs would go in a big circle! His tail was up and his ears were just flying !!!!!  He did not seem to be blind at that moment.  It is the first time he has ran!!!!  He was so happy !   Mommy was doing the Snoopy Dance."

And if you have ever seen Ms. Barbara do the Snoopy Dance, well, you know it's sort of like Natalie Portman as The Black Swan on acid.  It's beautiful.

So we are here to welcome you Wills as what I believe is our youngest Pup of the Week.  You have dogs here with experience of living in a sight challenged world, like Otis, and his Mom can help your Mom.  You do have a wonderful Mom, and Pup family, even if Josie is a bit of a grouch.  And you have an angel on your shoulder.  Mrs Sophie Bub, who you share a page with, which shows you how much your Mom loves you because I never thought anyone would share a page with Sophie.

So welcome our friend, you are a valued member of the Brigade, in a fantastic family, and have a wonderful life a head off you.,  And Wills, that's why you're our pup of the week.