Tails From Rainbow Bridge: Don't Believe Every Blog - All Dogs Do Go To Heaven 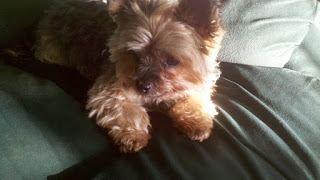 There are many names for the place where I live.  Some call it The Bridge.  Others call it Heaven.  Some call it the checkout line at Arby’s.  Those people are usually reassigned.
There is a dog side where people can live, a people side where dogs can live, a people side where no dogs can live, and a cat side where the cats decide who they want around them and shun the rest.
I don’t know what side you will decide to join but I do know if you were loved you will be here and if there is something you love it will be here too.
But there are some who try to teach otherwise.
Which brings me to Dominic Lynch, a recent graduate of Loyola University who writes for The Federalist,  Among blogs recently posted there was one stating that the Jedi were really the villains in Star War because the Empire was trying to preserve law and order.  I can’t make these thing up.  If I did I would be reassigned myself.
Many leading theologists have written that dogs are indeed allowed into heaven.  But they, unlike Lynch, are not political bloggers, which, as we know, is the closest to the Lord someone can get, according to 99% of political bloggers.   Lynch spends a long time explaining the words of Thomas Aquinas, who stated that dogs do have souls, but not eternal souls and therefore we are not allowed into heaven, a conclusion Aquinas never reached.  I know Thomas Aquinas.  I see him nearly every day.  Nice guy.  He gives me a treat.  Here in heaven.
Lynch maintains that when a human reaches heaven they will have no need for dogs, or anyone else, since reaching heaven brings you to a state of euphoria.  So to Lynch heaven is  meth.
Mr. Lynch and I have a lot in common.  We are both bloggers.  We both have opinions.  I have a lot of opinions about politics.  But I don’t blog about them because I don’t know much about it.  Being an angel in the afterlife I do know a lot about what happens when souls cross the River of Life.  I wish those souls who have never crossed over wouldn’t write about it.
Perhaps you don’t believe me.  Perhaps you even think that there is a human sitting at a computer writing this instead of me.  To believe it’s me is to have faith.  To believe in God, heaven, afterlife is faith.  To believe that your beloved pet is waiting for you is faith as well.
Why would anyone crush someone’s faith?  I guess for the same reason Mr. Lynch and his ilk write many of the things they write about.
Take the word of a pup who has been there, never lose faith, and always believe.