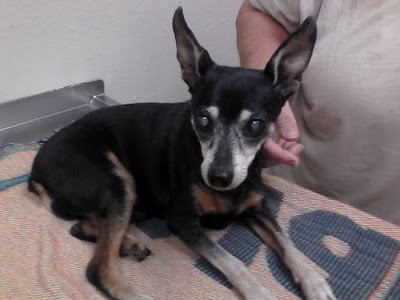 When I first arrived at Rainbow Bridge, I visited Angel Apollo’s house.  It was huge, befitting a dog of his statue.  Like Rainbow Bridge itself, our homes can expand to accommodate new family members who arrive.  Angel Apollo’s mansion has grown to make room for Angel Ace, their Dad, and recently Pancho.  Also, his land has expanded to welcome the big tree he used to lie under that passed from the earthly realm two years ago.   I did not plan to see Angel Apollo at the Rainbow Bridge Welcoming Center for a long time after Pancho passed away.  But that is where I found him, along with Ace, Pancho, and their Dad as they awaited another family member.
Angel Apollo’s mom had sent a message to him and Angel Ace that Ace’s brother Deuce would be joining them at the Bridge.  Deuce had become a part of Momma Kimberli’s pack after Ace had gone to the immortal word.   Deuce’s parents had abandoned him at a kill shelter when Ace became a senior dog.   He was 15 years old at that time.  He suffered many of the problems that older dogs face, plus he could not bark because his original parents had his vocal cords cut.
Several weeks ago Deuce lost his vision.  Momma Kimberli has had so many dogs at her house that one of them losing their vision was not a hindrance to her.  But then Deuce began to lose control of the dreaded bodily functions.  His poop slipped out of him like a breath, quickly and simply, wherever he lay.   Momma Kimberli did not mind cleaning him.  She had done it before, and she would do it again.  But Deuce's quality of life was slipping away.  He slept most of the day and was suffering from dementia.  Momma Kimberli decided, after 17 mortal years, to release him from his suffering, and to send him to Ace and Apollo.
Momma Kimberly had told Angels Apollo and Ace that they needed to look out for Deuce because he couldn’t bark.  She could not have been more wrong.  As soon as Deuce’s feet touched the Bridge, all his worldly woes were stripped away.  As the light from the Bridge bathed Deuce and healed him, Deuce began to bark.
And he had a lot to say.  All those years of pent-up barks spilled out of him as he climbed the stairs.  The sound of his voice was the most joyful thing he had ever heard.   His tail wagged, his ears were back, and when he reached us, he was on his back legs, dancing to the beautiful music his voice created.   Apollo and Ace joined him, and the three of them howled in joy.  Pancho snuck in between them and barked at the sky.
We were all impressed with how Angel Apollo and his pack adjusted when they got a new member at the Bridge.  Their home grows, their land expands, and they meet the immortal world with strength and dignity.  They get this from their mom, who, despite having lost so many dogs to the Bridge, still brings new dogs into her house every day to help them find homes.
I hope she is listening to the wind tonight.  The strange sound she will hear is Deuce's howl.