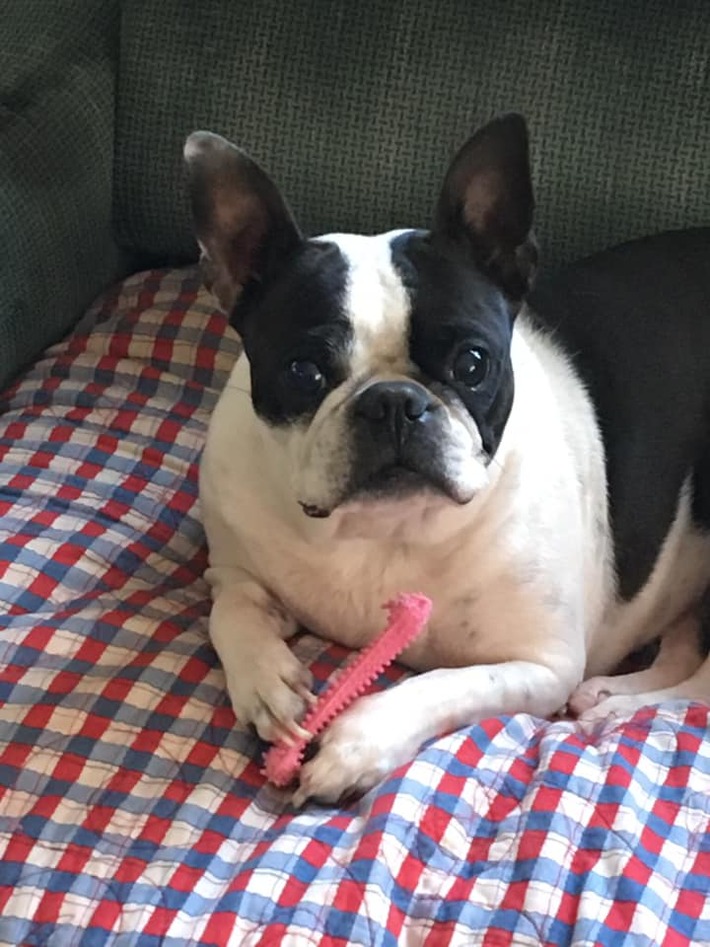 It has been a long time since I have climbed up the mountain to battle it out with the Big Guy over him forcing the wrong dogs, especially the young ones, to leave their parents and come here.  But this week I became inspired to do it again.

I have loyal and outstanding friends including, Brooklyn, McKinsie, Promise, and Megan, all from the Magnificent Seven, a grand pack of Boston Terriers who delighted their Mom Judy, and dad, for years.  In the early part of the last decade, it seemed like a new pack member arrived at the Bridge every week.  The original Seven are now all here.  They worked vigorously to find replacements in their parents’ hearts and pack, and they were successful.

One of these dogs joined the pack five years ago.  Her name is Whisper, a delightful pup with a happy and mischievous nature.  Since they were all young, the pack should have been stable for a decade.  But, the Bridge had other ideas.

The Lions came for Whisper with little notice. Suddenly, she developed breathing problems.  Her worried parents took her to three different vets without getting a definitive diagnosis, except that she had inflammation in her lungs.  The fourth vet said the two words that broke Whisper’s parents’ hearts:  Cutaneous lymphoma.  It was not treatable.   The vet suggested that Whisper goes to the Bridge that day, but the little dog wanted more time with her parents and communicated that to her mom, who took her home for one more week.

We angels had been inundated with prayers for Whisper.  We worked vigorously to heal her and flew dozens of prayers for her up the mountain to the Big Guy.  When Whisper got her diagnosis, we realized the answer to so many prayers were “no,” Whisper would not be healed.

The longer I am at the Bridge, the more I have learned to accept what I cannot change.  But sometimes you have to scream at the tide to stop crashing on the beach, even when you know that resistance is futile.

I flew all the way up to the most extensive cave on the highest mountain and entered without permission.  I stared up at the man sitting on his high throne.  “Why can’t Whisper stay with her parents, she is only five years old?”

“It does not matter how long a life is lived, but how well it is, and Whisper has had a full life with love and happiness,” he said in a deep voice.

I could not argue with that.  “But, what of her parents they have suffered so much.”

“Those who suffer the most when something they love becomes an angel do so because they had the most to lose.  The more you love, the harder it hurts when you become separated.”

“But why did they only have Whisper for five years?”

“If everyone were guaranteed a certain number of years, then life would not be cherished and guarded.  I fell very sorry for Whisper’s parents and the pain they are going through, but the pain is medicine.  They will be more caring people for having loved so many and lost so much, and that suffering has made them the people they are today.  The kind of people this country desperately needs.”

My barker went off. I checked it and saw that Whisper was arriving.  I left the Big Guy, without even giving him a goodbye.  I made it back just in time to swear in Whisper.  Then she was mobbed by her Boston Terrier angel siblings.

Whisper is now happily playing with his Bridge family, living in their big house, and joining when they visit their parents.  They want their mom and dad to know they have not left them, they are just a little further down the road awaiting them.  Their parents have angels all around them, helping them down the path and keeping them safe until they reach their destination.