FROM THE DESK OF FOLEY MONSTER: BOB LEARNS A VALUABLE LESSON AFTER HE LIES ABOUT FARTS. 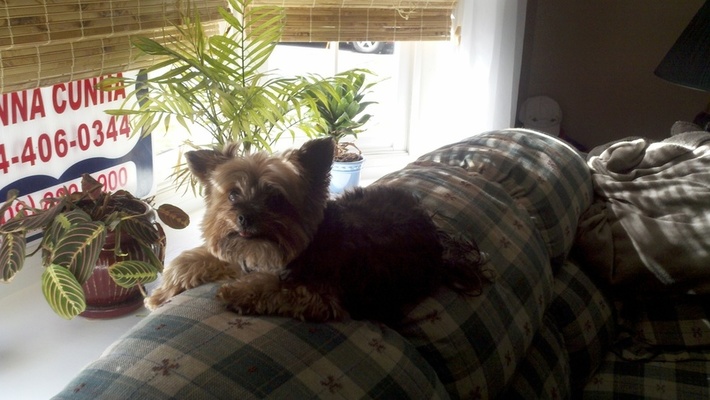 Puck’s angel brother Ruckus found him at a rescue. He was an exuberant black lab suffering from a Dark-Colored Dog at the Shelter Syndrome.  They are always the last adopted.  But Ruckus saw something in Puck’s spirit and fierce loyalty that would make him an ideal replacement for the angel in his family’s hearts.
Ruckus had been an only dog to his parents, Bob and Martha.  Their son Brad had taken a job on the other coast after graduation.  The two empty-nesters gave all their love to Ruckus, and he knew they would give it to Puck.
Puck was a happy dog from the minute he got home.  He loved snuggling with his mom, going on long walks, playing ball, and tug of war with his dad.  Martha’s a high strung lady.  She doted on both boys like they were her children and worried when either pup showed signs of illness.  Martha thought if she had been more attentive to Ruckus before being diagnosed with cancer, she could have had more time with him.  She was wrong, but that is the way parents are.  She was overbearing, but Puck found her sweet.
Being the dog of a high-strung woman meant many calls and trips to the vet, all false alarms.  Bob said that Martha took better care of the dogs than him, but he did so sweetly, charmed by his wife’s devotion.  But then Bob started to get some rumblings in his tummy,  from indigestion and wallpaper peeling flatulence. He wanted to hide the fact from Martha, who would have made him go to the hospital for unnecessary and costly tests.
One evening, while Martha and Bob were having a rib dinner, Bob felt a terrible cramp and had to relieve the pain by emitting a small fart.  Thanks to Bob’s self-control, the emission was silent but powerful.  Martha dropped the fork and held a napkin to her face.  “Oh my God, Bob, that is awful.  Did you do that?”
Like all men, Bob was cowardly and blamed others for his mistakes, so he told his wife that Puck emitted the fart.  The dog was shocked but did not defend himself.  He was more interested in getting ribs. During the night, even in bed, Bob ripped silent but deadly farts and blamed Puck.
The next morning Bob went to his job at the factory, and a worried Martha fretted over Puck.  Overcome with concern, Martha leashed the dog and took him to the vet.  Dr. Kempler did not find a reason for Puck’s flatulence.  Martha could not stand another night of Puck’s toots and persuaded the vet to give the dog several expensive tests, all of which came back negative.  The vet considered it the diet and sold Martha the world’s most expensive dog food bag for Puck.  She prayed it worked.
At first, there were no farts, and Martha thought the world’s most expensive dog food was working.  But after Bob and Martha ate supper, then fed Puck, the farting began again.   Martha grew worried and told Bob that she took Puck to the vet that morning, and since he was not better, she would have to take him tomorrow.  Bob asked his wife how much she had paid for Puck’s tests, and she told him it was $1,200, which was $1,175 too expensive for them.
Bob had to choose between money and pride.  Having a father who once wore a diaper to Yankee Stadium to make $20.00, he chose money and told his wife that he had been the farter and not Puck.
He had hoped that Margaret would be relieved that Puck was okay and worried about her husband, but all he got was anger.  He ended up sleeping and farting on the couch while Margaret shared her bed with Puck and his marvelous digestive system.  Plus, someone had to eat that expensive dog food, and it wasn’t going to be Puck.  For Bob, the only path to get back into bed is a colonoscopy, a cure, flowers, candy, and a new chew toy for Puck.
Puck was not mad at his dad; he knew the man was weak and stupid like most males.  But even for a dog, those darn farts were too much.