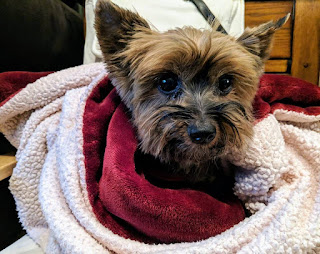 I knew the day would come.  I could see it, first in the distance, like dark, gathering storm clouds, then each day, it came slightly closer.  I used all my angel powers to keep the storm at bay, but in the end, I failed, and the dog I most tried to prevent from coming to the Bridge arrived today:  My dear, sweet sister Pocket.

I have never claimed to be a sharing dog.  Remember how I used to torment Pocket by stealing her ball and sitting on it?  I must admit I wasn’t a perfect sister, at least when we were mortal.  My jealous streak could overtake my entire body.  And when I became a Judge and went to the Bridge, I helped her battle her frequent health issues.  I told you I did it because I knew your heart would be broken when this day came, but also I was enjoying being Pocket free.

Pocket has been like a photo left out in the sun for the past three months, slowly fading away.  I couldn’t tell you how much she was suffering.  That was a promise I made to her.  If you had known her kidneys and other organs were failing, you would have made sure she wasn’t suffering by sending her to me.  But, all Pocket wanted was to be with you, and I promised not to let you know her truth.

When I lived with her, I thought Pocket was a whiney wimp, reacting in pain and fear to everything.  But, when I left, and she became the protector of your heart, I grew impressed with her.  Then she got sick and hid it every day from you.

That is when I knew I misjudged her.  My little sister Pocket, all five pounds of her, was the fiercest dog ever and was driven by her love for you.

As much as Pocket tried to hide the effects of her illness, her body betrayed her:  First with diarrhea, then with blood added to it, then an inability to go more than a few hours without going to the bathroom.  Also, she didn’t have the energy to walk across a room.  Her appetite abandoned her, and all she had the strength to do was sit on your lap.   I knew it was her time.

But, she is still a stubborn little wench and refused.  She said she could put up with any pain for you.  I had to provide a reason for her to join me, so I offered her a job as Chief Clerk of Rainbow Bridge.  Truthfully, I never had a better assistant than Pocket and could surely use her help.

She lifted her little head and asked, amazed, “You need me?

I told her, of course, I did.  She had saved you after I passed, and it was time for her to save me. I told her that River Song could handle our parents.  Pocket had trained her perfectly. Most of all, I said that all songs usually end sadly, but the final notes shouldn’t be the only ones you remember. It should be all the beautiful happy notes before that when the song was new, fresh, and young.

And that is when she agreed to join me at the Bridge. All her pain and suffering would end, and she would feel like a puppy again.

I could tell you about her arrival, but she said as soon as she can learn how she will recount it to you. I don’t want to steal her spotlight. I am afraid I may have already done that more than once.

So, Dear Sweet Mommy, don’t be sad because Pocket is young and healthy again. All her pain is gone, all suffering has diminished, and she feels nothing but love for you and her friends who took time out of their lives to pray for her show your great compassion.

I know the road before you is dark and heartwrenching as it should be when you lose something that you loved with all your heart and loved you even more. Pocket and I are together again, and we will guide you through the darkness in your dreams, and River will while you’re awake.

You are with the best moms, the best of women,  and we thank you down to the bottom of our paws.

Now the dynamic duo that sprung onto the Internet in 2007 with tails of wild exploits and daring-do have reunited, I can’t imagine the mischief we will create.  And the Big Guy better look out because my sister is here, and together we can’t be stopped.

Only three hours after her passing, I returned with Pocket to our yard as hummingbirds, and we played in the butterfly bushes while you watched from the window.   Pocket picked up borrowing bird’s bodies quickly, but she wanted to see you before the end of the night and to give you a wing flutter of thanks.

Posted by Foley Monster, Pocket and River Song at 11:14 PM